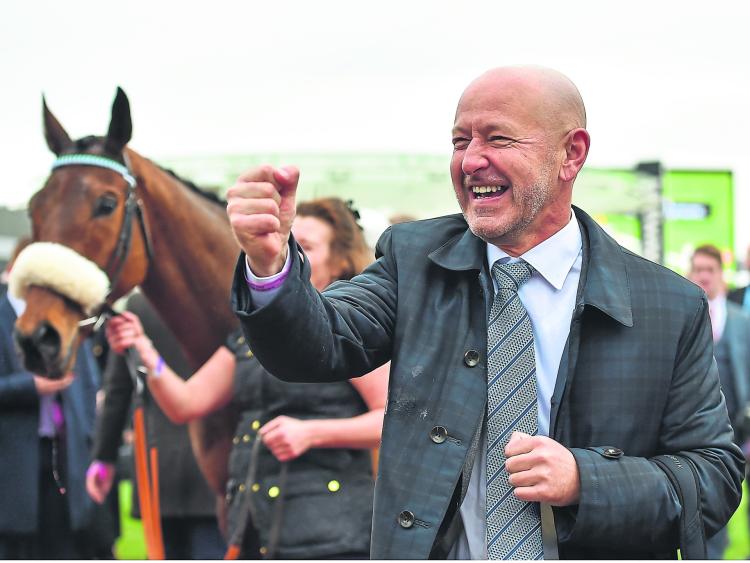 The likeable, plain- speaking entrepreneur is no stranger to the Prestbury Park winner’s enclosure, having walked away from National Hunt's richest festival with three first-place finishes in as many years.

This week, though, the affable father-of-three is going after the big one — and a chance to join the racing immortals.

There’s a mounting sense of anticipation within the Reynolds camp and further afield, with Presenting Percy in with a big chance of being crowned King of the Cotswolds on Friday evening.

“It would mean absolutely everything,” said Philip, when asked about the prospect of claiming jump racing’s blue riband event.

“It would mean so much — for a whole lot of different reasons.

“For one, it would be a fitting and great tribute to Dad, who was the one person who started my love of racing, but also for my father-in-law Bertie Farrell, who died three years ago.

Philip described both men as “crackpots” of National Hunt racing and said they would be uppermost in his mind as Presenting Percy takes on 19 rivals at 3.30pm on Friday.

A large Longford contingent is also expected to make the short trip across the Irish Sea with many more local aficionados tuning into their TV sets back home.

For all that support, Mr Reynolds was quite candid as to the expectation now firmly placed on both his and his race team’s shoulders.

“There is a big crew from Longford coming, a lot more than there was last year,” he confided.

“It’s great to have it in one way and I just hope they won’t be going home disappointed.

“It’s great to see all the support for him and the many people from home who will be there to cheer him on.”

Philip, together with his wife Anne, travelled to Cheltenham early this week and the couple will be joined there by their three children, Robert, Stephanie and Mark ahead of Friday’s showcase event.

The racing public have yet to see Gold Cup ante-post favourite jump a fence in anger this season, but his owner isn’t concerned about that.

“He’s absolutely fantastic,” said Philip, when talking to the Leader on Friday. “He has two pieces of work to do before heading for the boat on Tuesday and please God everything will be alright.

“He is 100% and despite all that is being said and written he hasn’t had one problem and I couldn’t be happier with him. Of course, myself and Pat (Kelly, the trainer) would have loved to have run him over fences but will that be used as an excuse next Friday if things don’t go to plan? It won’t. The horse is absolutely spot-on.”

Pat Kelly, one of racing’s most intriguing and unorthodox handlers, is a trainer Philip is hugely impressed by.

“The man's a genius,” he said, simply. “To be able to geta horse to Cheltenham — never mind win and to do it three times for me with the limited resources and facilities at his disposal — is truly remarkable.

“He only has about 15 horses at Craughwell in Athenry (training base) and 10 of those I own. He mightn’t be comfortable in front of a camera or microphone, but that's his prerogative. All I know is Pat and myself are handcuffed to each other. At least Anne can leave me — Pat can’t.”

Joking aside, that same steeliness is very much evident when Philip switches his focus to the man charged with steering Presenting Percy up the Cheltenham hill on Friday.

“Wouldn't it be an unbelievable tribute to a guy who is in the autumn of his career to do the unthinkable?” asked Philip.
Wouldn’t it just — and with 40,000 Longford souls cheering Presenting Percy every step of the way, the unthinkable might just happen on Friday.