Half parish, total pride: The story behind Mullinalaghta's meteoric rise

Mullinalaghta, a half parish of 440 inhabitants, won the Longford intermediate title in 2007, and they are now sixty minutes away from AIB Leinster Club SFC glory 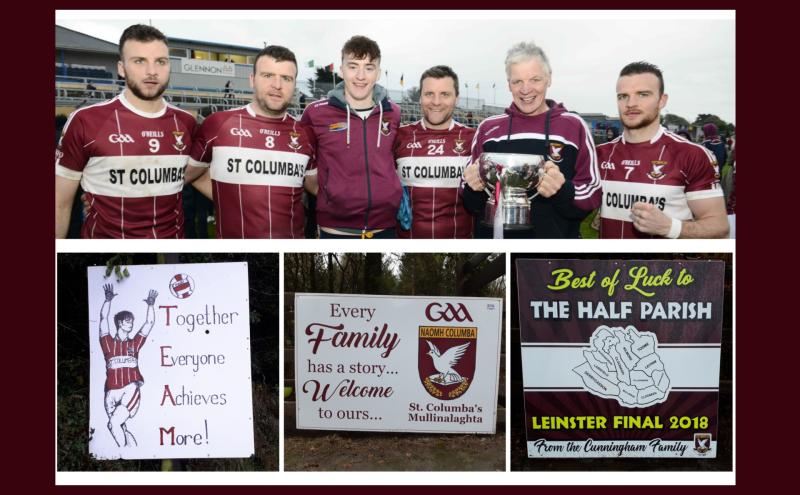 Dan McElligott with the Sean Connolly Cup and his five sons after Mullinalaghta won the 2016 Longford SFC title.

While the rain cascaded down on The Laurels on a dreary Sunday afternoon it failed to dampen the infectious enthusiasm of the close-knit Mullinalaghta St Columba’s community as they came together for a pre-Leinster Final 5km fun walk/run fundraiser.

“We know it will be an uphill task but we’re confident that we can upset the odds,” revealed upbeat club chairperson John Keegan Snr.

Mullinalaghta, of course, will create a major piece of history when they sprint out onto Bord na Móna O’Connor Park next Sunday as they become the first Longford club to ever contest an AIB Leinster senior decider.

It is a significant milestone for the ‘half parish’ which boasts 440 inhabitants.

The three-in-a-row Longford kingpins face a proverbial Everest challenge in the guise of Dublin giants Kilmacud Crokes however they are undaunted.

“We’re underdogs. We’ll give it 100% and we wouldn’t be afraid. We have got them outside ‘the pale’ so who knows what will happen,” pointed out club PRO Thomas McNerney as the rainfall intensified.

Mullinalaghta, arguably the smallest club in the province, are sixty minutes away from Leinster glory. It is the stuff that feeds dreams.

Incredibly, eleven years ago, they were plying their trade in the Longford intermediate ranks. They drew with Kenagh, 1-11 apiece, in the Gerry Hennessy Cup showdown and won a fiercely contested replay by the minimum margin, 1-10 to 2-6.

Mullinalaghta have remained senior ever since and their manager for that 2007 triumph was none other than Dan McElligott.
He once admitted, “I have been ‘addicted’ to this great game of ours since I was knee-high to a grasshopper.”

And Mullinalaghta certainly struck gold when the Kerry native arrived in their midst and began spreading his football gospel.

Hailing from Ballymacelligott - “not everyone has a parish named after them”, Dan jokes - he previously lined out with Kerry minors at midfield and also with Monaghan seniors at full forward (not a role he enjoyed!) after his work brought him to the Farney County.

Marriage to Bernie saw him make Mullinalaghta his ‘new home’ and in 1990 he played for the club as they won their second Longford intermediate title - the first was 59 years earlier in 1931.

Powered by legendary figures like Packie, Harry, Johnny and Petie Rogers, the Reillys - Jimmy, Paddy ‘County’ and Frank, alongside Matty, Mick and Jim Matthews, Mullinalaghta were a serious force to be reckoned with during the 1940s. They won the Leader Cup on six occasions between 1945 and '51, and they were county championship winners in 1948 and ‘50.

2016 saw Mullinalaghta end a 66-year sojourn in the senior championship wilderness and with 14 direct descendants of the 40s/50s team among their ranks, there was a poignant moment when captain Shane Mulligan and his team mates visited the local graveyard with the Sean Connolly Cup in his possession.

“The great, late Jimmy Reilly was a grand uncle of Shane’s. The current players grew up hearing the stories about the heroes of six decades earlier. Winning the Leader Cup in 2014 lifted a monkey off their backs and now having won three championships in-a-row they’ve created their own legacy and have given the youngsters of today heroes they can identify with.”

Dan and Bernie have five sons - Ruairi, Conor, Donal, Aidan and Cian, all part of the senior squad, demonstrating that club truly is family.

John Keegan explained, “There is great community spirit here. Everyone rows in. The mothers of the players prepare tea and sandwiches after training every Wednesday evening and our players come back for training from places like Dublin, Limerick, Galway and Dundalk, and claim no mileage. To be honest, we couldn’t afford the expense.”

Prior to the ‘07 intermediate win, Dan felt Mullinalaghta were bringing their preparation to a new level.

“In 2006, the same day Longford travelled to Kerry for an All-Ireland senior qualifier, we brought the intermediates to Ballymacelligott for a challenge game. You might call it a bonding session. We were doing strength and conditioning work in Cornafean and did pre-season gym training in the Breffni Arms Hotel and also did swimming pool sessions there. It was a novelty at that time and not many club teams were going to those lengths. In ‘07 we played Breaffy, club of the Mayo O’Shea brothers and that commitment and work, thankfully paid off.”

Thomas McNerney suggested that the successful Mullinalaghta/Abbeylara amalgamation of Northern Gaels was crucial to the development of the current senior side.

John Keegan remarked, “The amalgamation kept lads playing and gave them a taste of success. Too many GAA clubs lose players that are aged 17 or 18 and we are very lucky that this group came together.”

Northern Gaels began in 1984. John Reilly, Dan McElligott, John Fay and the late Peter Sheridan were key figures in ensuring the amalgamation became a reality. Dan also spoke highly of the contribution made by people like John Buckley, Harry Rogers, Thomas McNerney, Finbarr Meehan, Michael Cunningham and Shamie Columb, along with some current senior players, with the coaching of underage players. He says teacher Anne McCabe does fabulous work in the local national school and recalled how he’d a drop a handwritten note into principal Nuala Fox for her to read out in relation to informing pupils about training times. “The co-operation and support was incredible.”

Dan smiles when he remembers a young Brian Buckley saying, “If we could only win one bloody match.” They persevered and look at the massive strides that Mullinalaghta have made.

A firm believer in working with the ball and encouraging players to have fun at training - ‘after all it is their hobby’ - Dan oozes passion and positivity. “The players are all sons to me. If you don’t have fun, you have nothing. And a great characteristic of this Mullinalaghta group is that they possess a willingness to learn from their mistakes.”

In addition to the Northern Gaels victories, Dan feels an All-Ireland win from five years ago is just as significant in the evolution of the Mullinalaghta story.

ALSO READ: Mickey Graham has enjoyed it all as the manager of Longford champions Mullinalaghta

Whenever this club odyssey ends, Mullinalaghta will bid farewell to their charismatic manager Mickey Graham as he takes over the reins as manager of his native county Cavan.

John Keegan said, “Mickey was a great steadying influence and he instilled belief in the players. He will be a big loss, not only to us, but also to Longford football in general.”

Dan McElligott is a wealth of information and here is a fascinating statistic he unearthed from his vast archive.

Current Mullinalaghta senior players Luke Meehan, Aaron Earley, Rian Brady, Michael Cunningham, Aidan McElligott, James Mooney and David McGivney all featured in that victory over Kilmacud eight years ago and wouldn’t it be a truly amazing story if they could perform an encore in Tullamore next Sunday?

Dan thinks they can. “We need to win more of the individual battles than Kilmacud do.” John Keegan is also quietly confident. “I think we can do it.”

The buzz and atmosphere around the ‘half parish’ is amazing ahead of the final and everyone is bursting with pride at the manner in which their players have acquitted themselves.

“There will be nobody at home on Sunday. It will be a case of last man out, lock the door,” laughed Thomas McNerney.

And here’s hoping that mighty Mullinalaghta can execute a giant killing act of seismic proportions. Best of luck to them!