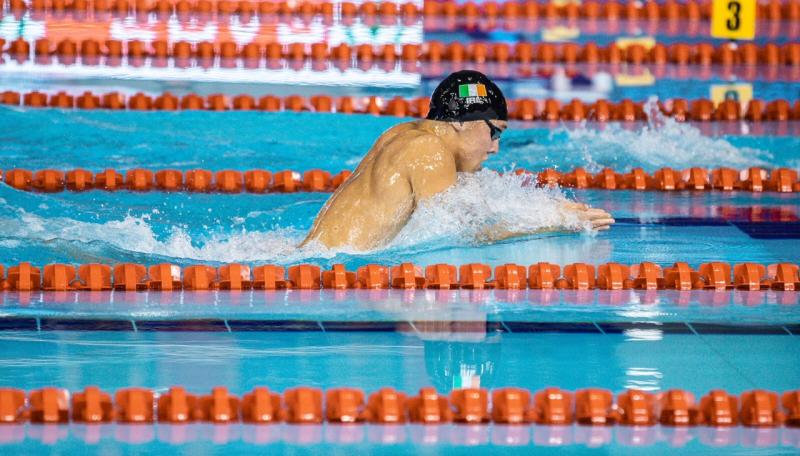 Longford’s Darragh Greene equalled his personal best time of 27.44 on the way to finishing 5th in the first semi-final of the 50m Breaststroke, and 12th overall, at the LEN European Swimming Championships in Glasgow this evening, Tuesday, August 7.

It was Darragh’s seventh race at the championships, his third semi-final, and the 23-year-old progressed from the 50m Breaststroke heats this morning in a time of 27.66.

On Friday, Darragh, from Newtownforbes, became Ireland’s first sub 60 second 100m Breaststroke swimmer. He made Irish history as he completed his semi-final in a time of 59.92. His time was also pre-validation for the 2019 World Championships in Gwangju, Korea.

That fifth-place finish in the second semi-final saw Darragh tie for 8th place overall with Russia’s Kirill Prigoda, and a swim-off was then required to separate the two. Prigoda took the last place for the final in 59.39 with Greene settling as first reserve in 1:00.44.

On Sunday, Darragh achieved his second fastest ever 200m Breaststroke swim when he was third in his heat in a time of 2:11.22.

But he was unable to scale the same heights in the semi-final later that evening. In a stacked race, National Centre Dublin swimmer Darragh, finished sixth in a time of 2:11.36 and 13th overall.

European breaststroke is renowned as the strongest continent in male breaststroke and by some margin and most of the semi-finalists in this event this evening will be those we will expect to see in the equivalent semi-finals in the World Championships next summer.

The positive news for Darragh is that his time in the 200m Breaststroke heats would have qualified him for any Olympic semi-final in non-suited history thus far.

Fantastic swim from @GreeneDarragh in 50Breast SF, he equals his pb of 27.44 to finish 5th in the first SF and 12th overall #Glasgow2018 #tramarenaIRL pic.twitter.com/BzZUphgC2b

Repping @sportireland tonight to cheer on Darragh Greene in the semi finals of the 50 brs. Let's go @swimireland #EC2018 pic.twitter.com/cdtSeVbmXZ