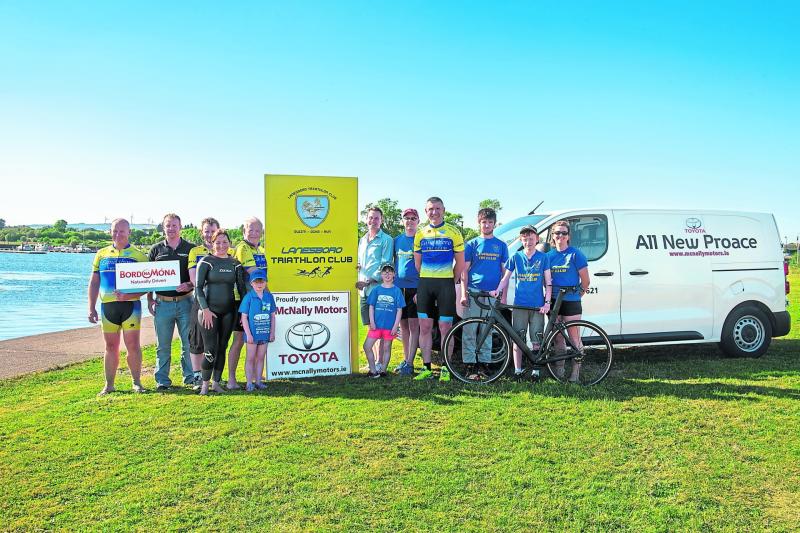 At the launch of the Two Provinces Triathlon 2018. Saturday 14 July will see Lanesboro Triathlon Club host Ireland’s top triathletes when they take part in this year’s sprint distance triathlon.

Like last year, the race is part of Triathlon Ireland’s National Series and Super Series. The Super Series is Ireland's only draft-legal triathlon competition and features some of the best athletes in the country racing in an exciting and fast-moving format. The 2018 Super Series is open to Category 1 and Category 2 athletes.

Two Provinces Triathlon, now in its eighth year, is well known in triathlon circles as one of the best sprint distance races in the country and will attract also those who are seeking valuable points in the National and Super Series.

The National Series and Super Series races are run over the same course with entrants starting with a 750m swim in the warm waters of Lough Ree. This is followed by an out-and-back 20km cycle on closed roads between Ballyleague and Scramogue. To finish off, there is a flat out-and-back run route along the Rathcline Road. The race includes a Try-a-Tri, with a shorter 200m swim, and the option to take part in an aquabike event (swim & bike). Both events take place simultaneously on the same course as the main race.

This year, triathlon clubs are being offered the chance to compete for a €500 prize and become the inaugural Two Provinces Club Champions. Each club member who completes the course will be contributing to the club score, with bonus points available for the first 10 finishers in each age group. The club with the highest total score will be crowned champions.

The Kidathon promises to be a fun-filled event with goodie bags, medals and a post race party for all who take part. The number of entrants is capped for open water safety and demand for places is always high – make sure your child has signed up well in advance of race day to avoid disappointment.

Taking Part
The Sprint Triathlon is open to anyone of 16 years of age upwards. You can enter as an individual or compete as part of a relay team on the day. Entries for all races are via www.triathlonireland.com

You must provide a Triathlon Ireland membership card or a special one day license at registration on race day, to be eligible to partake.

For further information on entrants, timetables, courses and much more please see our race website www.twoprovincestriathlon.com

Thanks!
The race could not go ahead without the support and hard work of all the local clubs, societies and businesses. Lanesboro Triathlon Club is extremely grateful for all the assistance. The race committee would like to relay a special note of thanks to the main race sponsors who are crucial to the success of the race, namely:
McNally Motors Toyota
Insuremyhouse.ie
Bord na Mona
European Café & Bistro
Johnston’s Pharmacy
The Yacht Bar
The Convent Guest House
Waterways Ireland
ESB
O’Reilly Group
K Steel
All Creatures Veterinary Clinic & Shop
Cooney’s HomeValue
Rosie’s Bar
The Swan Tavern
Bikram Yoga Athlone
Rustylemon Graphic Design

Post-race catering on the day will be once again provided by Paddy Paella. Food and drinks will be generously supplied by Walkers, Ballygowan, Fruit Shoots, Dolan Foods and Glenisk Yogurts. We are delighted to have them on board as without their fantastic support, we could not possibly stage such a superb event.
Large numbers of national and international triathletes will come to Lanesboro-Ballyleague, bringing with them with many more supporters. This is a true testament to not only the quality of the race, but also to the local amenities. Great credit must be given to the local tidy towns committees for having the two communities looking so impeccable for all our visiting athletes and supporters.
The club is concentrating on incorporating the spectators to make it an all-inclusive affair with music by local DJs and food stalls. We want to make it a very enjoyable family occasion and we’re determined to stretch it into a long-term yearly fixture so it’s important that it has a festival vibe too.

Road Closures
Finally, for safety reasons the following road closures will be in place during the Two Provinces Triathlon & Kidathon:
On Friday, July 13, there will be restricted access to the Rathcline Road from 7:30pm-8:30pm, from entrance to event car park to Harold’s Cross.

The club takes great pride in hosting a race where water and road safety are priority, where each competitor comes home safely and enjoys their experience. The club would like to thank everyone for their cooperation and support and hope you can come out and support all the athletes along the route during this fantastic local race.