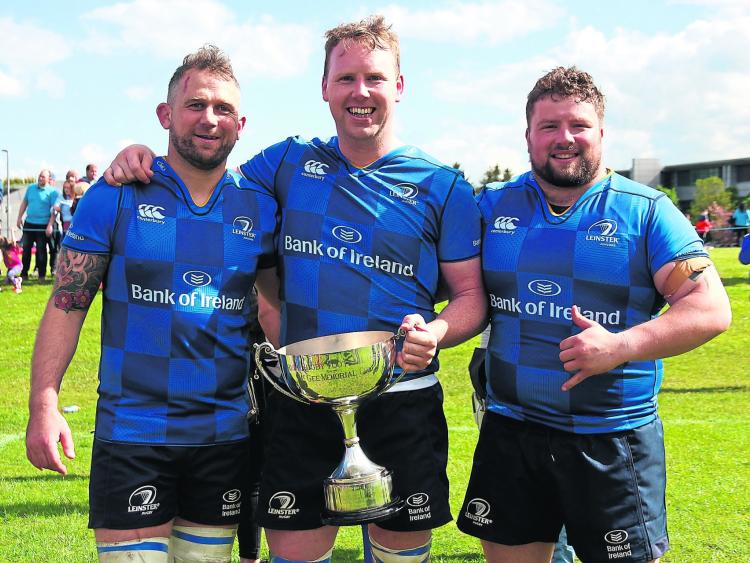 The Leinster Juniors, featuring Longford players Kieran O’Gorman, Benny McManus and Dylan Quinn, are this season's Interprovincial champions after their great win over the Ulster Juniors at University of Ulster Coleraine on Saturday, May 12.

Leinster had already secured victories over Connacht in Ballinrobe RFC and Munster in Coolmine RFC, but Ulster were narrow favourites going into this encounter. Ulster Juniors had also beaten Munster, 0 v 24 away in Muskerry RFC and followed that up with victory at home in Ards RFC against Connacht Juniors. These victories together with home advantage had Ulster quietly confident in the lead up to this match.

Ulster were first off the blocks with a penalty scored by Lee Steenson in the first minute of the game. A few minutes later, Leinster were awarded a penalty for a high tackle. The ball was kicked to touch, and from the ensuing line-out, Leinster deployed a superbly worked move that saw the forwards split, one group moving forward in the lineout, the other moving backwards.

The ball was thrown into the gap that opened in the centre of the lineout which Simon Feeney caught. There was no stopping the big wing forward as he burst through and over the line for the first try of the game. This was Feeney's first cap for the Leinster Juniors and what a start he had. The try was converted by Dundalk's Gearoid McDonald, bringing the score to 3-7 after 10 minutes of play.

After this, both sides exchanged penalties. Leinster were first to score through Gearoid McDonald but Ulster replied through their scrum-half Steenson. This brought the score to 6-10 after a lively opening half hour. The game was played at a very fast, almost frantic pace with each side enjoying periods of pressure in the opposing side's 22 in the first half. Ulster were awarded a further penalty as the clock wound down to half-time but the kick, from pretty much in front of the posts, hit the upright.
Leinster then struck with a killer score just on the stroke of half-time. A beautiful move by the Leinster players involving both forwards and backs saw the ball moved from inside their own 22 to the Ulster 22.

Captain Kieran O’Gorman (Longford) was involved more than once in this exhilarating move, before Dundalk's Gearoid McDonald went in under the posts for Leinster’s second try of the match. McDonald kicked the conversion bringing the half-time score to 6-17.

Five minutes into the second half, Ulster went over for their first try through Bradley Lunney. Lee Steenson added the conversion, bringing the score to 13-17. Ulster were very much back in the game but their hard work and early second half pressure was somewhat undone after 55 minutes when, an Ulster loose forward was yellow-carded. This led to a sustained period of pressure by Leinster on the Ulster line but Ulster defended stoutly and held the men in blue out.

Credit to Ulster who managed to prevent Leinster from scoring for the period of the yellow card. However, Leinster were playing with invention and great determination. Their hard work was rewarded just after the half-hour mark, when a penalty was kicked deep into the Ulster 22. From the resulting line-out, Leinster won possession of the ball and set up a rolling maul. The ball was securely held at the back of the maul and the Leinster men drove hard for the Ulster line. Kilkenny RFC man, Wes Carter rumbled over the Ulster line for the try and Gearoid McDonald added the conversion to bring the score to 13-24 in Leinster's favour.

Ulster were far from finished and on 76 minutes Ryan Garrett went over for a try far out to the left of the Leinster posts. The conversion was missed leaving the score at 18-24. The final few minutes were nervy but Leinster held out to secure a famous victory over their northern neighbours and with it the Junior Interprovincial Title.

Speaking with Head Coach Enda Finn afterwards, he said 'It's a fantastic feeling winning the series. It was a collective effort and as coaches all we did was empower the players, give them ownership and watch them flourish. They deserve all the plaudits, the last six weeks was a massive commitment at the end of a long season but with the right attitude and buy-in they have demonstrated what can be achieved'.

Longford player Benny McManus won a trophy for the best forward of the Interprovincial series.