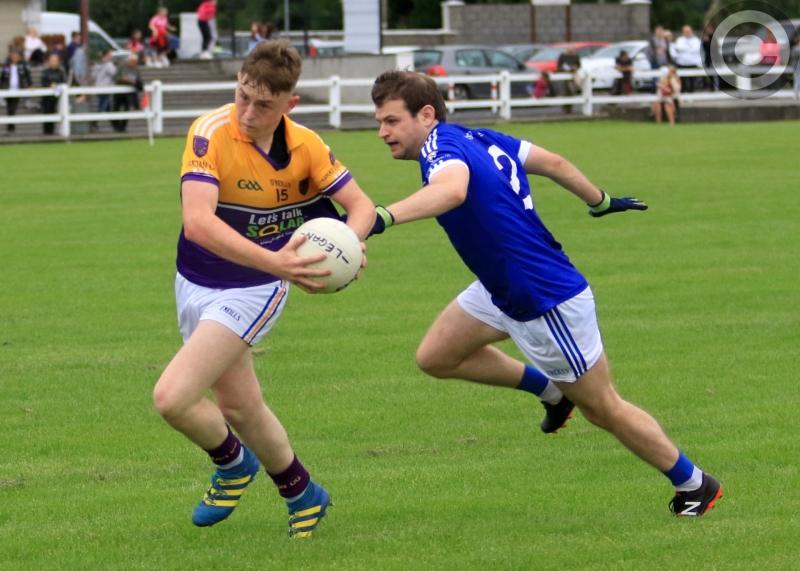 Reuben Murray on the attack for Young Grattans in breaking away from Legan Sarsfields defender Matt Kearney. Action from the Intermediate Football Championship first round clash. Photo: Syl Healy

The good news for Legan Sarsfields and Young Grattans is that both clubs were reinstated into this year’s Intermediate Football Championship after they were thrown out of the competition in the aftermath of the extremely nasty end of match bust up in Ballymahon.

The controversial first round clash at Leo Casey Park on Saturday July 22 was the main topic of discussion throughout the county last week and Longford GAA County Competitions Control Committee subsequently proposed at their meeting on Monday July 24 that both Legan and Grattans be expelled from the 2017 Intermediate Championship.

The clubs appealed that decision to the Longford GAA County Hearings Committee, who gathered on Friday night last to deal with the situation, and the Intermediate saga was sorted out as the clubs were given a reprieve to continue playing in the Gerry Hennessy Cup this season but were reputedly fined €1,000 each.

Both Legan and Grattans were back in action last weekend but suffered heavy defeats against Cashel and Rathcline respectively in the Round 2 games in Group 1 (see match reports on pages 72 & 73).

There are just two football championship games scheduled for this weekend, both in Group 3 of the
Connolly Cup, with the meeting of St Mary’s Granard and Fr Manning Gaels the main event at the Dromard grounds on Saturday evening, throw-in 7pm.

After losing to Ballymahon and Colmcille in their last two games, the pressure is very much on Granard who will end up relegated to the Intermediate grade should they suffer another setback and it is much the same story for the Drumlish/Ballinamuck side in this make or break match.

With two clubs demoted from Group 3 of the Senior Football Championship this year, twice beaten St Brigid’s Killashee looked doomed to an immediate return to Intermediate status in 2018 as they confront Colmcille in the curtain-raiser in Dromard, throw-in 5.30pm.

Following the results last weekend, definitely through to the senior championship quarter-finals are Abbeylara, Mullinalaghta and Killoe.