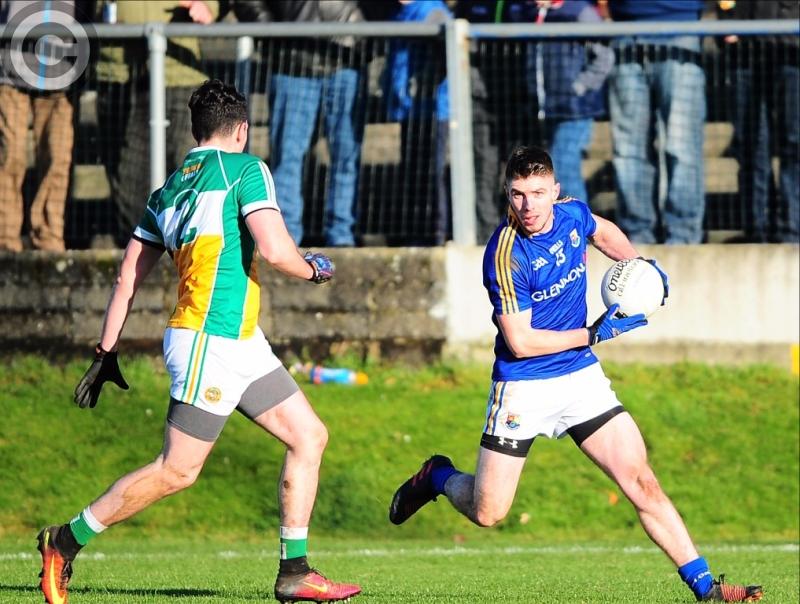 Robbie Smyth (who scored seven points) on the attack for Longford against Offaly in the National Football League Division 3 game at Glennon Brothers Pearse Park on Sunday. Photo: Declan Gilmore

Forced to field without suspended duo Diarmuid Masterson and Darren Gallagher, Longford still proved too strong for Offaly in making a winning start to the National Football League Division 3 campaign.

A disappointing attendance in the region of 500 gathered at Glennon Brothers Pearse Park on Sunday last to watch Denis Connerton’s side collect two valuable points with a hard working performance.

After failing to convert a couple of clear-cut goal chances in the opening quarter of the game when Sean McCormack and Liam Connerton had point-blank shots well saved by the opposing keeper Ken Garry and who had to settle for a slender 0-7 to 0-6 lead at the break, Longford gradually pulled away in getting the better of Offaly in comfortable fashion.

Having said that, the home county had a lucky escape when a goal attempt from Graham Guilfoyle was brilliantly saved by keeper Paddy Collum in the 48th minute at a stage when Offaly trailed by three points, 0-9 to 0-6.

Deadly accurate corner-forward Robbie Smyth was most impressive for Longford in firing over seven points (four frees) before he was eventually forced to retire injured in the 59th minute.

Smyth was replaced by Larry Moran and as it turned out it was the Killoe attacker who struck the killer blow in the 66th minute with a well-taken goal that put the issue beyond all doubt in establishing a commanding 1-12 to 0-7 advantage.

Offaly had suffered another severe setback a couple of minutes earlier when substitute Joey O’Connor (who was just on the pitch) was shown a harsh red card.

The visitors had another player sent-off in the third minute of stoppage time when midfielder Eoin Carroll received a second yellow card.

The faithful county fielded a much understrength team with top class forward Niall McNamee missing as he recovers from injury while another notable absentee was the versatile Johnny Moloney who is also currently on the casualty list.

Michael Quinn, Brian Kavanagh, Michael Brady, Mark Hughes and Andrew Farrell were all out injured for Longford, who will be hoping to build on the win over Offaly when they take on Louth (impressive 2-16 to 0-10 winners away to Laois last weekend) in Drogheda on Sunday next.