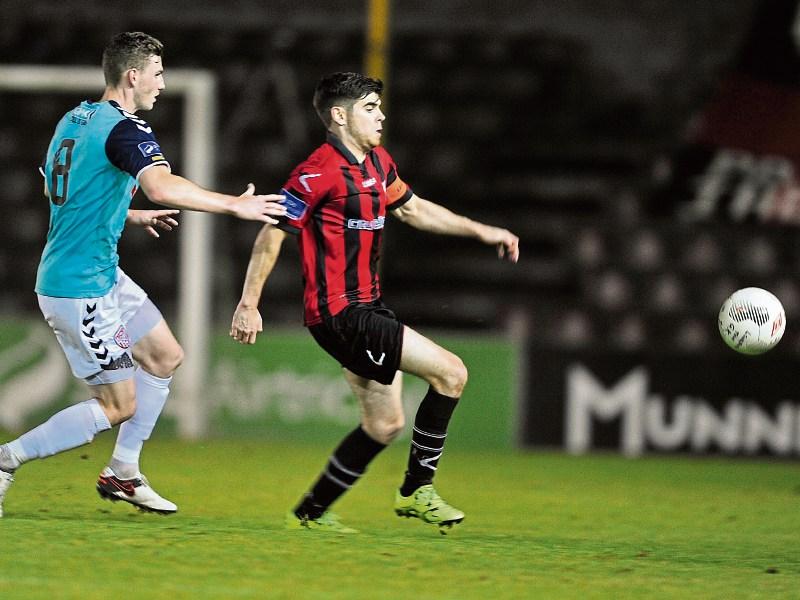 Despite taking the lead twice against Derry City at City Calling Stadium on Saturday night last,  Longford Town’s  defensive failings came back to haunt them once again as they crashed to a damaging defeat in the fierce struggle to avoid automatic relegation from the Premier Division.

It has been a problem all season for the Town; they can’t stop conceding soft goals. Manager Alan Mathews has made a difference and there has been progress in the way they play but defensively they still are making poor decisions and it’s proving very costly.

Speaking to the Leader after the game Mathews said: “Some of our play, particularly in the first half; first hour or so was very good but we allowed Derry back in. The second goal changed the game as far as I’m concerned. It was a bad goal to concede and from then on we were chasing. We wanted to win and needed the three points but it was not to be.”

After the Town regained the lead in the 63rd minute `through David O’Sullivan’s penalty, they sat back and allowed Derry regain the upper hand. The Candystripes levelled in the 76th minute through Rory Patterson and then two minutes later the same player scored the third and ultimately the winner for the visitors.

It was cruel on Longford.  Mathews said: “You make bad decisions and you get punished in this league. Derry punished us. A lot of good play, a lot of positives but really it was all about the result and we just didn’t get it. We were up against good opposition but we contributed to our own downfall by virtue of silly mistakes.”

The first chance of the game yielded the opening goal when Don Cowan’s cross was finished to  net by David O’Sullivan in the 12th minute. Derry had chances after that with Patterson coming close twice in the space of a few minutes.

In the 33rd minute the Town had appeals for a penalty turned down when Cowan’s shot was handled in the box by Dean Jarvis. Assistant referee Michelle O’Neill had a good view but didn’t raise her flag.

Peter McGlynn had an effort saved by Derry keeper Ger Doherty in the 37th minute and then one minute later the visitors levelled matters when a cross from Ronan Curtis was finished to the net by Barry McNamee.

Longford  had a glorious opportunity to regain the lead straight after when Derry netminder Doherty did well to save O’Sullivan’s effort with his feet. Just before the break the assistant referee wrongly raised her flag up for offside after Jamie Mulhall threaded through a perfect ball for another scoring chance.

Derry City started the second half brightly with Conor Powell clearing the ball away from Patterson in the 57th minute. Then in the 63rd minute Town were awarded a penalty after Niclas Vemmelund brought down Kaleem Simon in the box and David O’Sullivan stepped up to slot the ball past Doherty for his and his side’s second goal.

Vemmelund tried to make amends down the other end but his overhead kick went over the bar in the 74th minute but Derry drew level two minutes later when Patterson found the net after connecting with a pass from McNamee.

The visitors then  took the lead for the first time in the 78th minute when Josh Daniels pass was slotted home by the dangerman Patterson. Derry went looking for a fourth goal and in the 81st minute Town defender Pat Flynn did well to shake off Patterson’s challenge.

Home keeper Ryan Coulter then saved from Patterson  in the 84th minute and Ronan Curtis fired the ball over the bar  in stoppage time.

Although his side are still six points adrift at the bottom of the table, Alan Mathews isn’t accepting relegation just yet.

“There will be some twists and turns between now and the end of the season at both ends of the table.  We have to make sure we capitalise on any opportunity that is given to us. The game against Derry was one that got away. It’s going to take a great effort to survive. We certainly will not be, in any shape or form, be giving up on this extremely tough battle.”