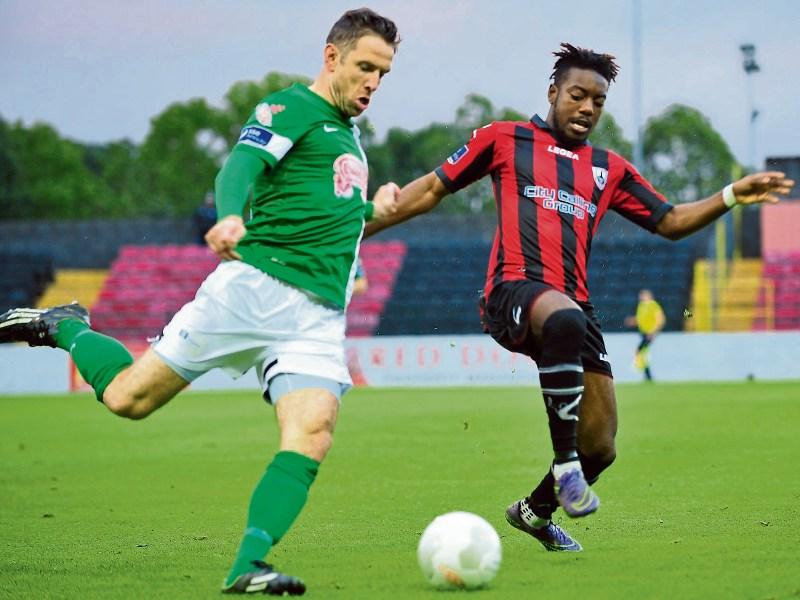 This was a game that was always going to be tough for Longford Town, having conceded nine goals in their two previous league meetings with title chasers Cork City this season, and it was more of the same in the Premier Division clash at Turner’s Cross on Friday night last as the bottom club suffered another relegation setback.

Speaking after the game the Town manager Alan Mathews, in his first fixture back in charge, made the following comments: “A lot of the play from us was decent but we fell down on the basics; we didn’t defend properly. For the first goal we really should have done a lot better but ultimately Cork City are an excellent side and were always going to make it difficult for us. A lot of positives for us despite the bad result.”

In front of the official attendance of 2.046, it took Cork just six minutes to break the deadlock when defender Alan Bennett headed home after connecting with a corner that dipped over the head of Town keeper Ryan Coulter and they could have scored again one minute later but Karl Sheppard’s effort was blocked by Town defender Yann Mvita in the box.

In the 13th minute the home side did double their advantage when Sean Maguire shot to the net after finishing off Stephen Dooley’s great pass. The Town defended poorly for both goals but battled back and after a fine Kealan Dillon effort was tipped over the bar by opposing keeper Mark McNulty, who produced a quality save, Longford striker Eddie Dsane directed a header wide from the resulting corner.

Dsane had other chances but didn’t test McNulty with his efforts that were comfortably saved. Sheppard should probably have scored a third goal for Cork when he shot wide but they were awarded a penalty in the 26th minute. Peter McGlynn brought Bennett down in the box after committing a clumsy challenge and up stepped Sean Maguire to dispatch the spot kick past Ryan Coulter.

Gavan Holohan had a chance for Cork shortly after and then the Town enjoyed another good spell with Philip Gannon’s shot deflected wide while Kealan Dillon again brought a good save out of McNulty.

Longford, to their credit, pulled a goal back right on the stroke of half-time to give themselves a glimmer of hope. Eddie Dsane played the ball into the path of Peter McGlynn and he found the net with an excellent strike.

After wasting chances in the first half, Karl Sheppard finally got his name on the scoresheet with four minutes gone on the changeover when he finished off a terrific crossfield pass from Sean Maguire.

Further Cork chances were squandered  by Stephen Dooley and Sheppard but Longford Town kept plugging away in the face of adversity and Eddie Dsane, proving to be a real threat up front throughout the game, shot straight at McNulty in the 72nd minute.

Peter McGlynn was gifted a consolation goal for Longford in the 86th minute, the result of some very sloppy defending by Cork, but it was John Caulfield’s superior side who had the last say when Karl Sheppard fired home the fifth goal  in the 90th minute after connecting with the perfect pass from substitute Chiedoze Ogbene.

With just eight games to go Alan Mathews still believes that the Town can stay up.

“We have got a lot of games to play. This was a particularly tough one (away to Cork)  but we will get ready for the next match (at home to Bray) and try and get a positive result. I believe that there is a good crew of players here who are prepared to put in their best efforts and try to give the club every chance to stay up. We will keep going until the very end.”