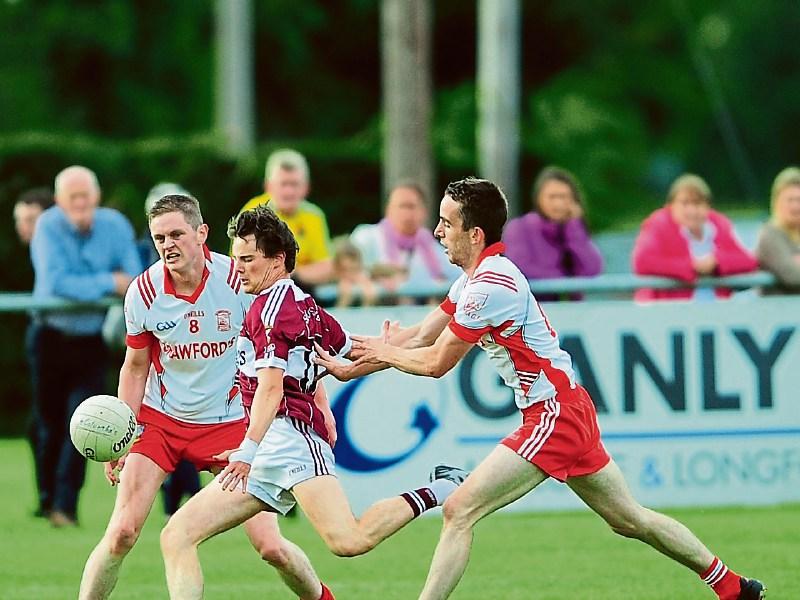 A stoppage time score from a free converted by David McGivney earned Mullinalaghta St Columba’s a draw against Abbeylara in the Senior Football Championship first round game at Maguire Park, Ballinalee on Sunday evening last.

A large crowd were in attendance to watch this eagerly awaited clash between two sides tipped to go far in this year’s championship and while Abbeylara will wonder how they didn’t claim the win they were guilty of terrible shooting in the first half.

St Columba’s also had trouble in front of the posts and it took them 23 minutes before they got their opening score of the game; a  David McGivney point and whose free taking kept the Mullinalaghta side in the game. Rian Brady was posing a lot of problems in the forward line and Abbeylara conceded a number of frees which McGivney duly punished.

Mickey Graham’s side only scored two points from play and that’s something he will want his side to improve on. Abbeylara for their part will want to get better accuracy in front of the posts and in the opening 10 minutes they kicked 5 wides.

Two frees from Jason Kelly gave them an early lead by the 6th minute before James McEntire hit over a fine point to extend the advantage in the 12th minute.

After being outplayed in the opening quarter of the contest, Mullinalaghta’s first chance didn’t come until the 13rd minute but James McGivney hit his effort wide and they followed that up with another wide.

Some patient play in the 19th minute ended in Robbie Smyth shooting over the bar to put Abbeylara into a four point lead.

An excellent effort from Rian Brady got their second point on the board before Abbeylara scored again in the 25th minute when Jason Kelly fired over his third free. Some terrific fielding from Aidan McElligott led to Mullinalaghta’s third point in the 30th minute; another McGivney free.

Conor Berry and Jayson Matthews then exchanged fine points as Abbeylara held a two point lead going in at the break; 0-6 to 0-4. The lead was just one two minutes into the second half when David McGivney hit over a free after Rian Brady was fouled.

Neat play between Robbie Smyth and Conor Berry saw the midfielder hit over a fine point to put Abbeylara two ahead in the 36th minute. But Mullinalaghta kept with them and with David McGivney on form he struck a fantastic free to cut the gap to one again in the 41st minute.

The game was level in the 43rd minute when McGivney was on target yet again from a free.  With so much at stake between these two sides the game got niggly and some fouls should have been dealt with by the branding of black cards.

Abbeylara  went ahead again in the 48th minute with another Jason Kelly free. Mullinalaghta piled on the pressure but Maurice O’Connor’s side defended well and thwarted several scoring chances.

Then a free from Robbie Smyth was cleared to Jason Kelly in the 54th minute and he scored to put Abbeylara ahead by two again but that was to be their final score of the game.

Another well struck David McGivney free cut the deficit to just one with five minutes of the game left. Both sides then enjoyed possession but just couldn’t make it count on the board.

As the clock entered stoppage time Mullinalaghta went on the attack again and were rewarded when Rian Brady was fouled. Up stepped McGivney again and he kept his composure to slot over his seventh free for the equalising score.