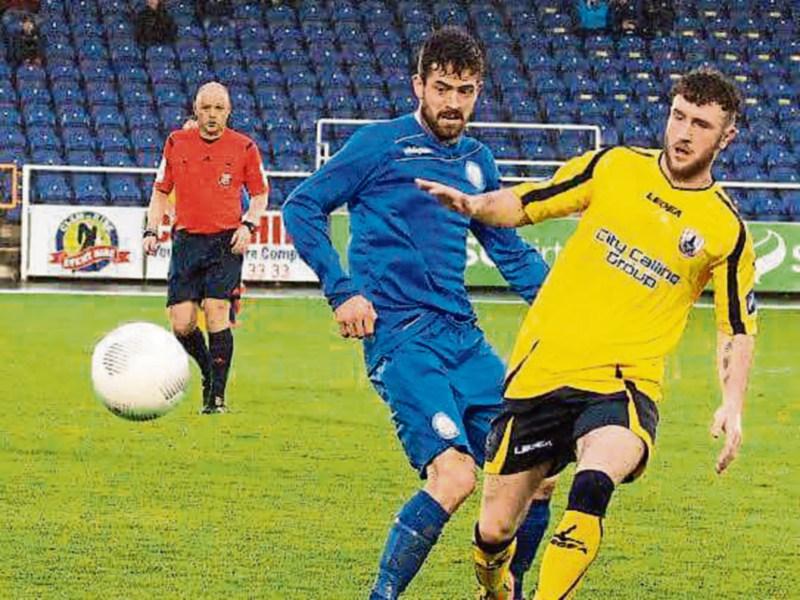 A stunning strike from Lee Duffy and another first half goal from Philip Gannon clinched Longford Town a place in the last sixteen of the FAI Cup following their win over First Division opponents Waterford United at the RSC on Friday night last.

Watched by the dismal official attendance of just 268, Duffy broke the deadlock in the 24th minute when finding the back of the net with a fantastic long range shot and any slim hopes that Waterford had of causing an upset were dashed when Philip Gannon extended the Longford lead in the 38th minute.

It was a badly needed result for Town manager Tony Cousins, whose side are enduring a serious struggle in the league this season with just a solitary win over Wexford Youths in their opening Premier Division fixture.

Following on from their morale boosting 3-3 draw away to St. Patrick’s Athletic in their previous game, this was another fine display from the Town with regular goalkeeper Paul Skinner back in action after injury and keeping a cleansheet in the process of winning this tricky second round tie.

It was Lee Duffy who had the first chance of the game in the 12th minute but his shot went across the face of the Waterford goal while the home side created their opening opportunity in the 19th minute with Town keeper Skinner doing well to save Philly Gorman’s close range effort.

Five minutes later Longford took the lead when Duffy hit the target with a terrific strike from 35 yards out in his first goal for the club. And the same player (back in the team after a lengthy injury absence) had a chance to score a second goal in the 37th minute after getting on to the end of Kaleem Simon’s pass but Duffy’s effort was cleared off the line by Waterford defender Colm Nugent.

Moments later the Town got their second goal when Philip Gannon shot to the net after capitalising on a poor Waterford clearance and from the edge of the box he directed the ball past the opposing keeper Corey Chambers.

Eight minutes into the second half David O’Sullivan had a chance to get a third goal for Longford but after going around the Waterford keeper he was denied by defender Nugent who got back to clear the danger.

O’Sullivan had another opportunity soon after but after receiving the ball from Kealan Dillon he failed to get his shot on target.

After being completely outplayed for the first half and the early stages of the second half, Waterford began to come into the game and had a good chance in the 66th minute to pull a goal back. Philly Gorman connected with Robert Buckley’s cross but his header was excellently tipped over the bar by Town netminder Skinner.

From there until the finish the Town sat on the comfortable cushion of their 2-0 lead and progress in the FAI Cup is a big lift for all concerned with a difficult league game to come against Cork at City Calling Stadium on Sunday next (kick-off 3pm).