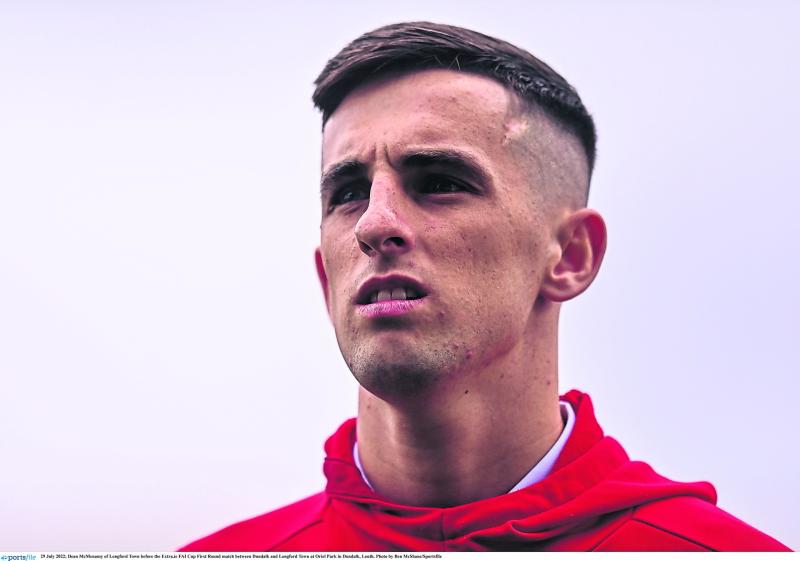 Longford Town manager Gary Cronin must be happy with his team's recent league form with another win against Bray Wanderers on Friday night last.

Next up are Wexford FC at Bishopsgate on Saturday night (kick-off 7.30pm) and Longford will be confident of gaining a fourth successive win in the First Division.

The Town came away from the Carlisle Grounds with three valuable points after scoring three goals in a game that they controlled from the kick-off until the final whistle.

The team that took to the field on Friday last was possibly the form eleven at the moment with recent signings Mark Hanratty, Darren Clarke and Jordan Adeyemo all starting together for the first time. Dundalk loanee Hanratty, who made his debut as a half-time substitute against Cobh Ramblers the previous weekend, did well enough to get the nod from manager Cronin to start against Bray.

Another recent arrival Darren Clarke has given the Town good width on the right and he has shown that he is a player for the future.

Striker Jordan Adeyemo is starting to produce the form that had him wanted by many clubs over the last few seasons and he has undoubtedly regained his spark in front of goal.

His arrival from Galway United signalled his upsurge in form which is very pleasing for his new manager Gary Cronin in the bid to cement the Town's position in the play-off spots.

The Town took on Bray with renewed confidence after two league victories on the trot and knowing that a win would keep them in fourth place.

The records will show that striker Jordan Adeyemo helped himself to two excellent goals and the other came from a penalty.

Sam Verdon gave the home goalkeeper no chance from the spot and one has to at this stage give the captain a special mention for his hard work in every game since he returned to the club at the beginning of this season.

Over the years Sam has been used as an out and out striker but Gary Cronin has given him a different position in the current team and he seems to be really enjoying himself as he is playing out of his skin in every match.

The recent arrival of his brother Adam from UCD has strengthened the Town's midfield as he was a very important part of the college midfield.

There is no doubt that Gary Cronin has done a very good job in strengthening his squad during the July transfer window and with that in mind we can look forward with confidence to the remaining seven league fixtures.

In the previous meetings the Town recorded two victories and Wexford winning the other game between the clubs this season.

The opening meeting between the clubs took place back in mid March in Wexford. On that occasion the Town ran out 3-0 winners.

Dylan Barnett gave the Town the lead after only two minutes and Ryan Graydon added goal number two after 19 minutes. Wexford improved after a shaky start and were very competitive all over the pitch until the 82nd minute when Aaron Robinson scored for the visitors.

The teams met again at Bishopsgate in the first weekend of May and on that occasion it took an injury time goal (90 +4) from captain Sam Verdon to snatch a 2-1 victory.

Former Town player Jack Doherty gave the visitors the lead after only two minutes with an unstoppable free-kick that flew past the home keeper Luke Dennison Eric Molloy equalised for the Town in the 25th minute and it looked as if the visitors had done enough to take away a point when skipper Verdon scored the all important second goal.

The third meeting between the clubs was played at the end of June in Ferrycarrig Park and like in previous games between the clubs this was also a very close encounter. Luka Lovic gave the home side the lead in the 71st minute and while Karl Chambers equalised four minutes later, Conor Barry became the home hero when he scored in the 93rd minute to give Ian Ryan's squad a vital win.

On Friday last Wexford were at home to Cobh Ramblers and the game ended 2-2. Conor Drinan gave the visitors the lead in the 49th minute but Wexford  equalised nine minutes later when Harry Groome scored.

Sean McGrath put Cobh back in the lead three minutes later but midfielder Luka Lovic equalised in the 85th minute.

As the table stands the Town are fourth on 42 points with Treaty United in the final play-off spot on 36 points which is a tribute to the job that Tommy Barrett is doing with the Limerick club.

Wexford are now sixth in the table on 32 points so a Town win would almost guarantee them a place in the promotion play-offs.

Ian Ryan is doing a marvellous job since he became the Wexford manager, taking them from a team struggling at the wrong end of the table to a club that has potential for a crack at promotion.

Their recent victory over Sligo Rovers in the FAI Cup clash at the Showgrounds show how far the new management team have taken them since taking over at the beginning of the season.

The Wexford squad have a real Longford  look about it with former Town  players Conor Davis, Jack Doherty, Joe Manley, Aaron Dobbs and Aiden Friel in their squad. Wexford also have Dinny Corcoran who is one of the more experienced strikers in the league.

Midfielder Harry Groome is a very exciting prospect while Conor Barry, like Corcoran, has lots of experience.

Make no mistake about it, this Wexford side will be hard to beat in their chase for a place in the promotion play-offs but the Town are playing very well and should be good enough to collect another three points.