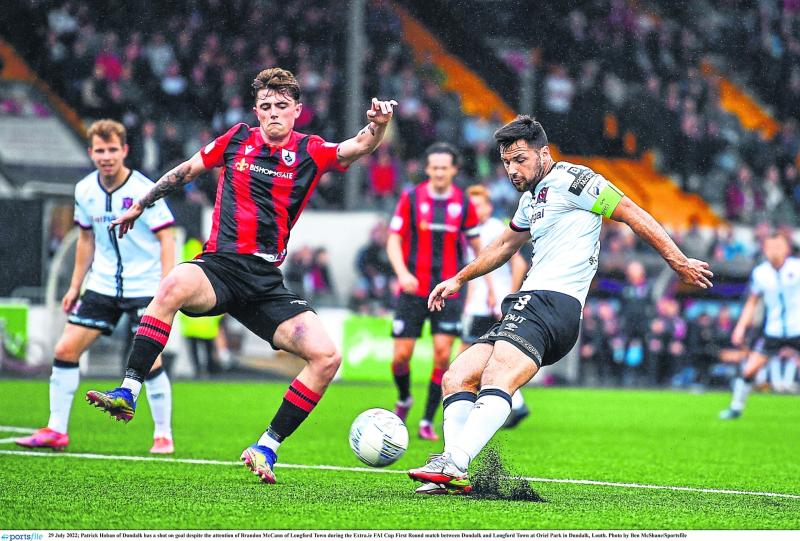 Four goals in ten second half minutes ensured Dundalk’s comfortable passage into the second round of the FAI Cup as they eventually broke down the brave resistance of Longford Town at Oriel Park on Friday night.

Chances of a shock win for the First Division outsiders were slim but Longford worked extremely hard in the first half as the sides ended up scoreless at the break.

Premier Division giants Dundalk stepped up another couple of gears to dominate the second half with goals from Greg Sloggett (2), Patrick Hoban and Joe Adams sealing a comprehensive victory in the end.

The deadlock was eventually broken in the 58th minute when Adams, from Steven Bradley’s neat pass, forced the Town keeper Luke Dennison to push the ball straight into the path of Sloggett to score the opening goal.

The floodgates started to open after that, and Dundalk made it 2-0 in the 61st minute as Hoban blasted a header into the back of the net after getting on the end of a good cross from Bradley.

Two minutes later it was 3-0 thanks to substitute Adams, and from inside the area he fired the ball past Dennison who did get a touch but to no avail as Dundalk were now in cruise control.

Man of the match Sloggett completed the rout in the 68th minute when he scored the fourth goal after connecting with a left wing cross from Ryan O’Kane.