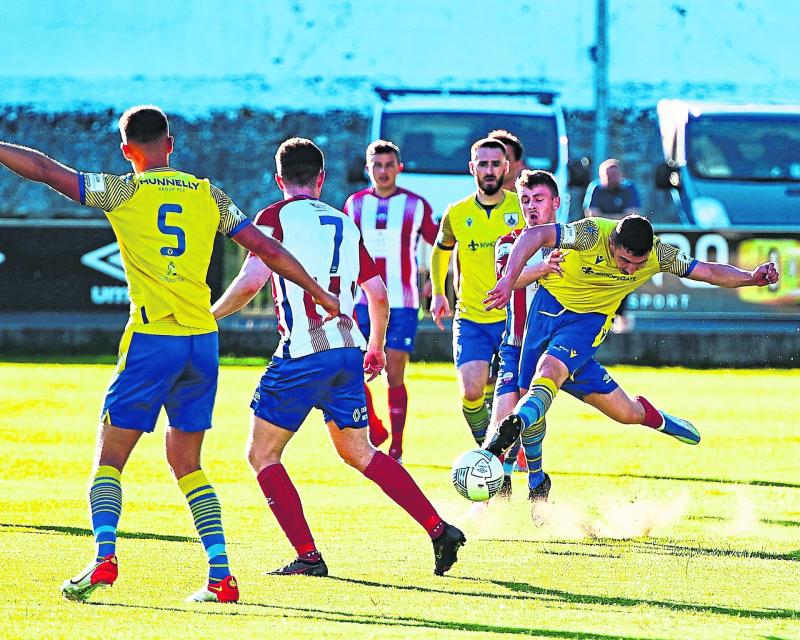 A big crowd is expected for the latest meeting of Longford Town and Athlone Town at Bishopsgate this Saturday night, kick-off 7.30pm.

Games between the midland rivals are usually very tight and despite Athlone being bottom of the table they will undoubtedly be a tough nut to crack.

The teams have met twice so far this season with the Town holding all the aces as they have won both games to date.

The first game between the clubs was at Bishopsgate back in early April with Gary Cronin's side coming out with a 2-0 victory.

The game was very tight from the kick-off as the visitors played very well defensively and the game reached the half-time break with a 0-0 scoreline.

Despite being on top for long periods in the first half the Town were struggling to break down a resolute Athlone defence.

The Town came out for the second half meaning business and three minutes after the break the Town got their long awaited breakthrough.

Longford were in control at this stage and six minutes later the home side scored goal number two through defender Michael Barker who has a great knack of scoring vital goals when needed.

That was the insurance goal for the Town who dominated for the rest of the game without adding to their tally.

The next meeting between the clubs was at the Athlone Town Stadium and on this occasion the Town had to battle for the full 90 minutes to pick up the three points on offer.

Athlone took the lead after only 19 minutes when Shane Barnes blasted the ball to the Town net.

It was real end to end football in this game and the Town got back into the game on the half hour mark when Karl Chambers blasted the ball to the Athlone net from a very acute angle coming in from the right.

The away supporters were celebrating again soon after when the Town took the lead in the 34th minute.

This goal was scored by the outstanding Ryan Graydon  who waltzed past a static home defence and gave the home keeper no chance.

Unfortunately the club lost Graydon during the July transfer as the talented winger made the move to Derry City.

It's interesting to note that two of Longford’s goalscorers in the games to date against Athlone are no longer playing for the club.

As stated Ryan Graydon is with Derry City and  unfortunately Darren Craven is out for the rest of the season with a very bad injury.

John Caulfield was in the transfer news during the week when he signed former Town striker Rob Manley from Bray Wanderers and he scored on his debut at Eamon Deacy Park.  Getting back to Adeyemo who made his Town debut at the Markets Field on Friday night last when he replaced Joe Power in the 70th minute.

Gary Cronin will be hoping that the former Galway, Shelbourne and Drogheda United player will score the goals needed to keep our promotion play-off push going to the end of the season.

Town supporters will remember him from a game at United Park when he came off the bench in the second half and scored a very spectacular goal for  Drogheda.  Looking back on last Friday's game against Treaty United one wonders how a team that comprehensively beat second in the table Galway in their previous fixture  could be very poor on their visit to Limerick and suffer a bad defeat.

We all know that the team needs strengthening and hopefully Gary Cronin will do that.

Last Friday's game was about chances and we didn't do that in the first half and we were punished for all our misses. There is no doubt that we should have been ahead at half-time but poor finishing was very evident. Giving away two penalties and a red card didn't do our chances any good and we can't blame anyone except ourselves.

It's imperative that we bounce back straight away and pick up three vital points on Saturday night against Athlone and hopefully manager Cronin will make a few more new signings.

Athlone have made a few new signings already with keeper Vladislav Velikin making his debut  against Bray and striker Valeriy Dolya replacing Thomas Oluwa during the game.

This is a very young Athlone side with many players coming through from the club’s under 17s/19s which is great for a provincial side.

Adam Lennon, the manager's son, has returned to the club from UCD and he is a very talented player.

Longford will be expected to beat bottom of the table Athlone at Bishopsgate and hopefully a vital home win will materialise on Saturday night.