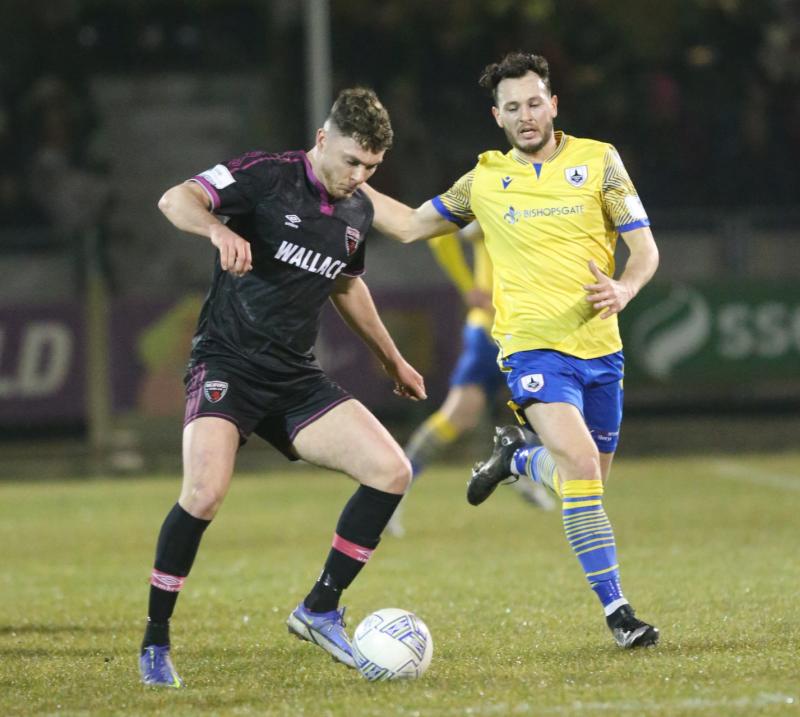 Following the fine win away to Wexford last weekend, a big crowd is expected at Bishopsgate this Friday night with Longford Town looking for another positive result against Galway United, kick-off 7.45pm.

The Town played Cork in their opening fixture of the season and could have won and are away to Waterford on Friday April 1 with Ian Morris's side the favourites to get promotion.

Galway, with a big financial backing, will be coming to Longford in a confident frame of mind. John Caulfield’s charges have beaten Cork City at Turners Cross with the only goal of the game coming from midfielder Edward McCarthy in the 37th minute.

Galway played Waterford at Eamon Deacy Park and they came from two nil down at half-time to salvage a point in a 2-2 draw. Jordan Adeyemo and centre half Stephen Walsh scored the second half goals.

Galway had a very impressive 3-1 victory over Bray Wanderers at the Carlisle grounds with David Hurley, Stephen Walsh and Shane Doherty the goalscorers in that match.

Last weekend Galway played near neighbours Athlone Town and got a 2-1 victory over the bottom of the table side.

Two goals in eight minutes around the hour mark from Spaniard Manu Dimas and Wilson Waweru gave Galway a two nil lead and while Athlone pulled a goal back in the 85th minute, Galway held out for another vital victory.

Galway have a strong panel of players with a very impressive bench alongside a very competitive first eleven. Keeper Conor Kearns is a top netminder and he has to be on his toes as former Republic of Ireland under 19 player Matt Connor is waiting for his chance to get back into the team.

Killian Brouder and Conor O'Keeffe are two very experienced defenders and in Alex Murphy they have one of the top young defenders in the country. Alex came through from the clubs under 17s/19s and he has played for the Republic of Ireland under 18 team. Diego Portilla is another very good player and the Spaniard has given the team great belief and experience.

In midfield Conor McCormack, who has played with Derry City, Cork, St Pat's and Shamrock Rovers,  has given them that experience that is needed to challenge for the First Division title.

McCormack is partnered in the midfield sector by Edward McCarthy while up front Galway can call on Wilson Waweru, Jordan Adeyemo, former Waterford player Mikie Rowe.

Looking at the Galway league position and their very impressive squad one can see why they are top of the table and one of the favourites to go up this season but the Town manager Gary Cronin will have similar ambitions in the coming months.

The Town travelled to Ferrycarrig Park on Friday last and came away with three valuable points after a three nil victory.

Gary Cronin only made one change from the team that lost to Bray a few days earlier with Shane Elworthy coming in at right full and his runs up the right caused many problems for a Wexford side that included six ex Town players.

The Town won 3-0 but in honesty the scoreline didn't do the home side justice as they had many chances and if one or two of them went in the result may have been completely different.

Dylan Barnett opened the scoring for the Town in the 2nd minute and his former Bray team mate Ryan Graydon added goal number two with an excellent chip over former Town keeper Paul Hunt after he parried the initial shot.

Aaron Robinson, who is playing extremely well this season as he has bigger responsibility in midfield, scored an excellent goal in the 82nd minute to seal an excellent victory.

The second half saw the introduction of Karl Chambers who replaced Eric Molloy and the former under 19 player didn't disappoint.

Another player from our under 19s Matthew O'Brien replaced goalscorer Robinson in the 83rd minute and Callum Warfield replaced Sam Verdon in the 70th minute.

It was great to get three points from a game against a very useful Wexford side who will take points off many teams this season.

There is no doubt that we will have to up our performance on Friday night against Galway if we are to achieve another positive result but this new team that Gary Cronin has put together are capable of beating any opposition in the First Division.

The team are in transition with quite a few new faces in the squad and the emergence of many of our under 19s coming through which is great to see.

Aaron McCabe and Cristian Magerusan are both still out through injury and their return to full fitness will be welcomed by Gary Cronin.