Longford Town hoping to spring a surprise against Dundalk at Bishopsgate 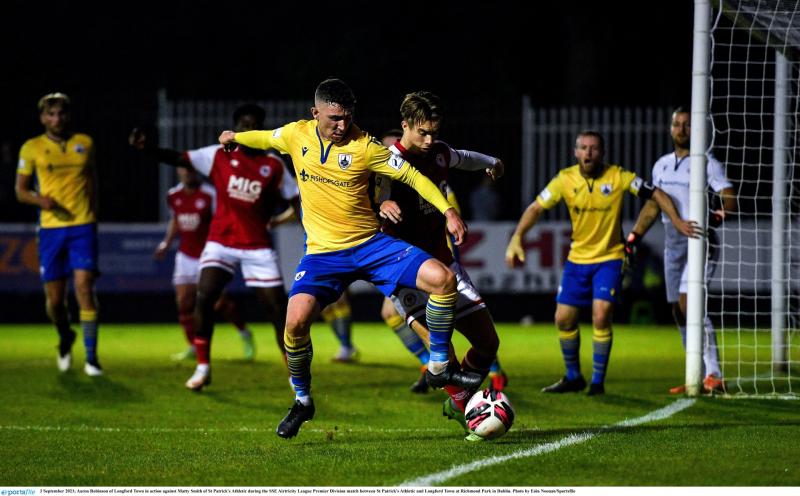 The Town have ten games left in this year’s league campaign and to date have 11 points from 26 games which is 17 points behind Dundalk who are in freefall at the moment but they have two games in hand.

Waterford, who were bottom of the table earlier in the season, have a new manager and quite a few new players in their squad and they are currently a point ahead of Dundalk.

Longford’s position at the bottom of the table is very bad indeed and if they are to have any chance of survival in the Premier Division we need to take full points from the remaining ten games and hope for favourable results elsewhere.

Last Friday night the Town were in action against St Patrick’s Athletic at Richmond Park, losing 3-2, and the manager Daire Doyle made three changes from the side that started in the FAI Cup defeat against UCD at the Bowl the previous weekend.

Fit again Shane Elworthy and Dean Byrne were back in the team after being out due to different injuries while Lee Steacy returned in goal after Mick Kelly played in the Cup game.

Longford’s season-long problems of not being able to take their chances and then getting caught out at the back has cost the club many points this season and it is very tough on a general young squad in the fierce battle to stay in the Premier Division.

This has been a very hectic season for Dundalk with many changes made both in the squad and the team management.

Former Town player Vinny Perth is the Dundalk manager again and he has a really tough job on his hands trying to stabilise a struggling squad.

Quite a few injuries have caused havoc for Vinny regarding team selections. Last week Dundalk drew with Waterford and currently on the casualty list are David McMillan, Patrick McEleney and long time absentee Brian Gartland.

Striker Pat Hoban also missed a big part of the season due to injury but he is back in form after scoring a hat-trick in the recent FAI Cup clash against non-league St Mochta’s.

When you look at the current Dundalk squad you can see the international impact as many players have come in from all parts of the world.

Midfielder Will Patching is one of the best players in the league and the return of defender Daniel Cleary has given the Dundalk manager Vinny Perth a boost in his bid to steer his side out of the relegation zone.

The first meeting between the clubs at Bishopsgate in early May finished in a 2-2 draw after the Town let a two goal lead slip with early goals from Dylan Grimes and Rob Manley setting up a great chance of a shock win.

But Dundalk recovered to snatch a point with Chris Shields scoring the equaliser in the closing stages of the match.

The next fixture at Oriel Park ended in a 1-1 draw with Aaron McNally giving the Town the lead after only 14 minutes but once again Shields came to Dundalk’s rescue when he found the back of the net close to the final whistle. Shields has since departed to join top Irish League club Linfield.

Saturday night’s game at Bishopsgate should be a cracker and there is no doubt that the Town need a win to keep alive their slim hopes of survival in the Premier Division.