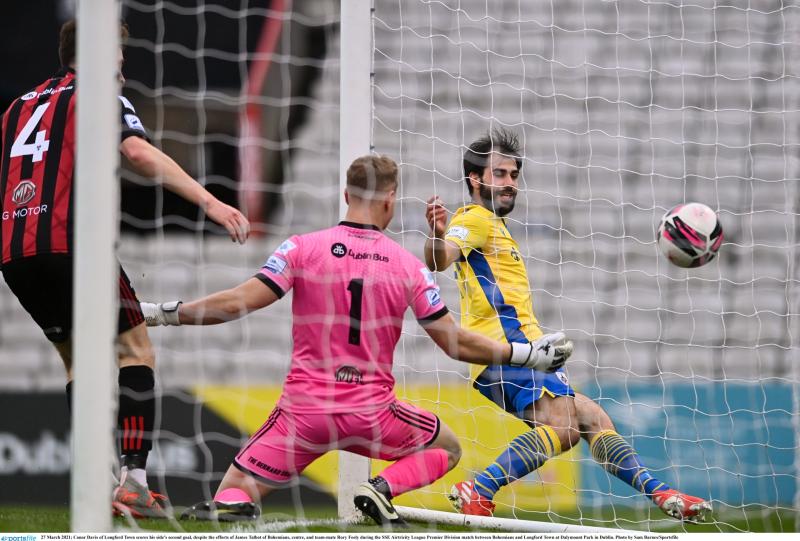 Substitute Conor Davis proved to be the saviour as Longford Town staged a great comeback in a dramatic finish to snatch a draw against Bohemians in the SSE Airtricity League Premier Division clash at Dalymount Park on Saturday.

Two late goals from new signing Davis saw Longford come from 2-0 down to claim a vital point in a terrific start to life back in the top flight.

In the final quarter of the game, Town manager Daire Doyle made changes and altered the formation and it paid off. Davis scored his first goal in the 76th minute and 10 minutes later he struck again to leave the sides all square.

Town keeper Lee Steacy played a major part in this remarkable result when he made a number of excellent saves in the first half. The visitors were slow to get into the game and didn’t force Bohs keeper James Talbot into making a save until just before half-time.

Longford were without regular striker Rob Manley who was out injured with a hip complaint and he will have a scan during the week to see what the damage is.

Bohemians enjoyed early possession but for all their dominance they created just one chance in the opening quarter; Ross Tierney with a shot from distance that went just wide.

The Town tried to keep it tight but Bohs broke the deadlock in the 20th minute through Georgie Kelly. Liam Burt provided the perfect pass and Kelly shot low past Lee Steacy.

Steacy was called into action two minutes later, making a fine double save. First he denied Burt and the breaking ball fell to Tierney but he was denied by a point blank save.

Bohs scored their second goal in the 26th minute when Longford failed to clear the ball and Tierney pounced to shoot low to the bottom corner of the net.

After creating nothing of note, the Town won a corner in the 30th minute thanks to good work by Sam Verdon. Dylan Grimes whipped in the corner but it was headed over the bar by Joe Gorman.

Steacy made a fine save in the 37th minute to deny Kelly but the ball was parried into the path of Keith Buckley who somehow shot over the bar.

As the first half went on the Town slowly came into the game. In the 44th minute James Talbot made his first save when he stopped a Dean Byrne effort and the loose ball was cleared by Bohs. One minute later a free-kick  from Dylan Grimes just went wide of the far post.

Longford tried hard to find a way back into the game in the second half but had a lucky escape when Georgie Kelly’s effort in the 68th minute hit the butt of the post. Town boss Daire Doyle decided to make changes and they had the desired effect.

In the 76th minute the Town pulled a goal back through substitute Conor Davis who weaved his way past the Bohs defence and from a tight angle found the back of the net.

Davis grabbed the equaliser in the 86th minute when he toe-poked the ball home from Callum Warfield’s cross to leave Bohemians stunned in a sensational end to the game.