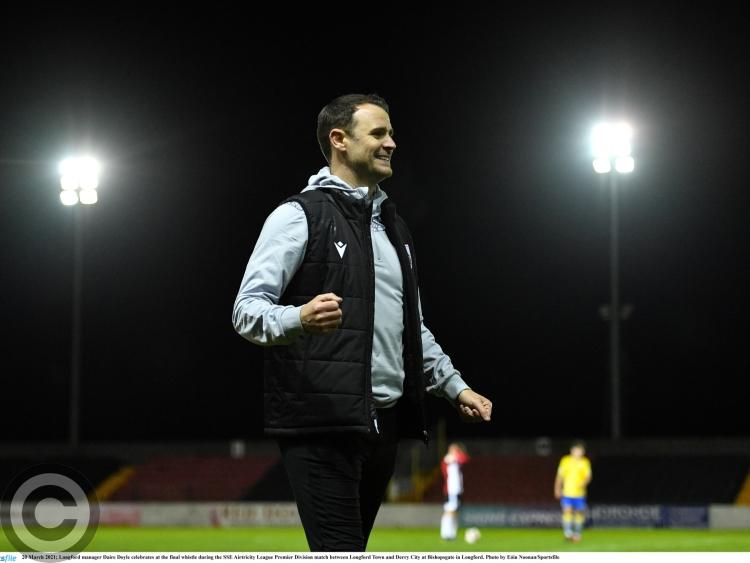 Boss Doyle said: “Excellent three points, 2-0, clean sheet. Fantastic in possession and out of possession and a game that we dominated and controlled.

“Probably could’ve won by another goal or two. Derry did cause us a couple of problems at set-pieces and I thought we dealt with them quite well.”

Dylan Grimes got Longford's first goal in the 8th minute and was immense all evening. Doyle was delighted for Grimes: “Brilliant young lad and a player I’ve a great time for. I know what he gives to the club and how much he wants it. It’s a real chance for him, our club, everybody here that we can compete and thrive at this level.”

The Town were full value for their win and it was an excellent performance. They attacked in numbers and also had players dropping  back when defending.

Doyle said: “We work on a number of things, in possession and out of possession with different formations. Their jobs are known and we work on them in training. They know what’s expected from them and you do have to get back in numbers.”

As the game went on, Longford's fitness levels didn’t drop. Doyle admitted that this is something that they have worked on and signs on it.

“It is something that we pride ourselves on is the fitness levels within the group. We are maybe one of the few teams that aren’t full-time in the league but by no means will we be found wanting in our fitness department. We feel we’ll be able to play at that tempo all the time.”

The Town were written off before the start of the season with many tipping them to be relegated. Doyle is hoping to prove the doubters wrong.

“We are at the top table, where we want to be and want to make the very most of it. We don’t just want to come up to make up the numbers. We will compete every single week. I’ve a bunch of characters and players in there that I know will give me that commitment every single week.”

The Town head for Dalymount Park to take on Bohemians this Saturday evening (kick-off 4pm).

The last time they played Bohs they were beaten on penalties in the FAI Cup in 2019 after putting in a terrific performance. Doyle is hoping they can repeat Saturday’s performance in Dublin 7.

“That’s one we were unfortunate to lose on penalties and we missed a penalty in the 90th minute. We put in a fantastic performance that night.

“I’m expecting a performance in the league game this Saturday and it’s something that we’ll expect week after week. I know we have the quality and the numbers in the squad to make my life difficult to pick a team.”

The Town boss is happy that his side go into that game with three points on the board.

“I’m really happy that we did that. For those boys now they can see what their performances can give them. It can give us the opportunity to pick up a result in any given game against any team. We are excited about the challenge that’s ahead of us.”