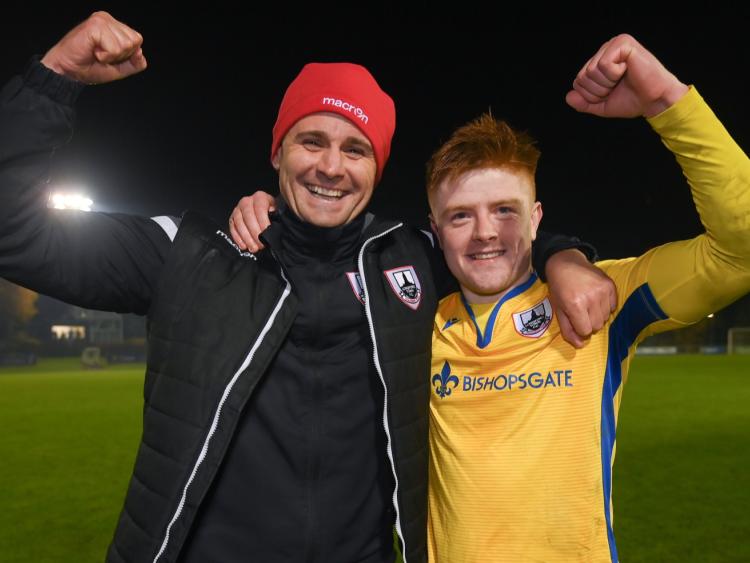 Longford Town are just a step away from a return to the Airtricity League Premier Division for the first time since 2016 following a terrific win over Galway United at the UCD Bowl on Friday night.

Daire Doyle’s side now await the outcome of the final round of fixtures in the top flight on Monday night which will determine the opposition (looking like Finn Harps or Shelbourne) in the promotion/relegation play-off which is scheduled for Sunday November 15 at a neutral venue.

Goals from Karl Chambers (43 mins) and the outstanding Aodh Dervin (81 mins) saw Longford Town win the First Division play-off and it was well deserved as they built on the momentum of the dramatic win over UCD at the same venue the previous week.

The Town had to endure a nervous end to the game with a late goal credited to Killian Brouder (88 mins) giving Galway a glimmer of hope but the midlanders stood firm in a tense finish to emerge victorious.

The first chance of the behind closed doors match came in the seventh minute when Aaron McNally took a shot but Galway keeper Michael Schlingermann got down to save.

In the 15th minute Dylan Grimes was unlucky to see his excellent long range effort come off the top of the post in what was a very lucky escape for John Caulfield’s side.

Galway enjoyed some possession but failed to trouble Town keeper Lee Steacy with the Town defence so resolute.

Longford broke the deadlock in the 43rd minute following a fine move that was started by Aodh Dervin. Rob Manley passed to Aaron McNally and while his fine shot was flapped by Schlingermann, the alert Karl Chambers pounced to finish the breaking ball to the net.

Galway came close to an equaliser in the 51st minute but Conor Barry’s effort just went over the bar. Aaron McNally and Rob Manley then had chances for Longford but both blasted their efforts over the bar.

The Town struck the killer blow in the 81st minute when Dylan Grimes did very well to play the ball into the path of Aodh Dervin and the local hero hit a superb shot that found a way past the opposing Galway keeper Schlingermann.

While Galway pulled a goal back in the 88th minute through Killian Brouder, the Town held out for a worthy win in the push for promotion that will hopefully become a reality next weekend against the team that finishes second from bottom in the Premier Division.