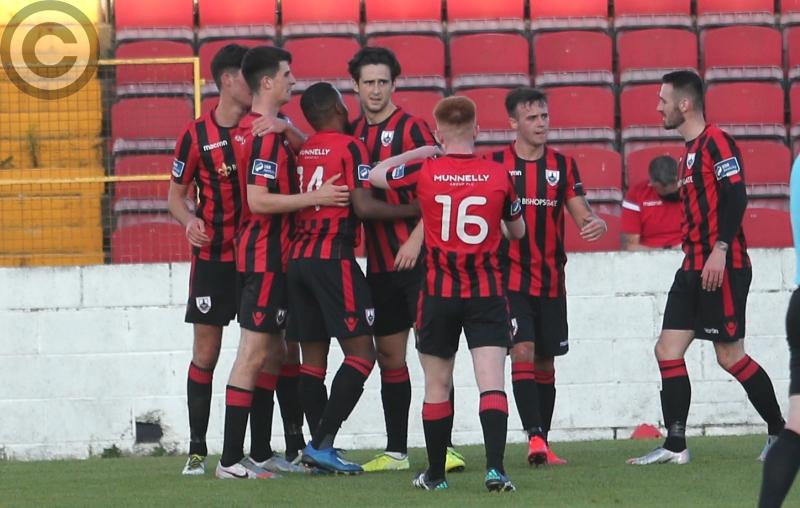 Sam Verdon (centre) celebrates scoring the first of his two goals for Longford Town late in the first half of the game against Athlone at Bishopsgate on Saturday night: Picture: Syl Healy

Sam Verdon struck twice late in the first half for the goals that earned Longford Town a vital victory over Athlone at Bishopsgate on Saturday night.

The Town claimed their first win since the resumption of the Covid-19 delayed league and in doing so moved up to third in the First Division table; behind second place Drogheda United on goal difference.

It wasn’t a great performance from Longford but it was a much needed result after drawing with UCD and losing to Bray Wanderers in their previous two games.

It was a dour and drab opening half an hour with very few chances. The home side had a scare in the 21st minute when a poor pass from Sam Verdon was played to Dean George but he really should have done better with his effort.

Longford very nearly got an opening goal through Athlone defender Evan White. A free-kick from Dylan Grimes was played to Shane Elworthy and his cross met the head of White who nearly put the ball into his own net.

The deadlock was finally broken in the 41st minute when Lido Lotefa found Sam Verdon and he shot low to the net. Minutes later Verdon got his second goal when he finished Rob Manley’s pass to the net.

Longford dominated the second half and should have added to the scoreline with Athlone keeper Aaron Myles saving efforts from Lido Lotefa and Rob Manley.

Athlone had a chance in the 55th minute but Jack Reynolds fired his shot over the bar while Sam Verdon squandered an opportunity to complete his hat-trick in the 62nd minute.

Longford defender Dylan Hand forced a save out of Myles in the 71st minute who then produced a fantastic save in the 81st minute to deny Rob Manley from close range. Soon after Manley failed to capitalise on a mistake by Athlone’s Scott Delaney.

Athlone did get the ball in the net in the 90th minute through former Longford player Lee Duffy but it was ruled out for offside.