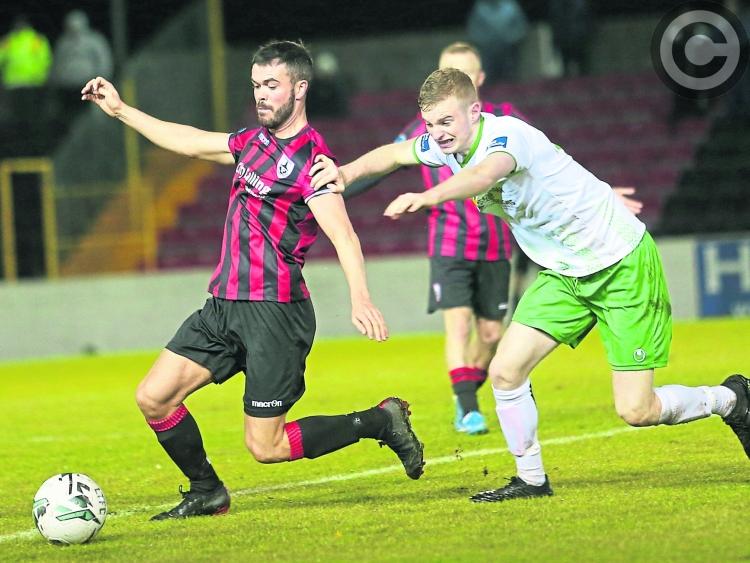 Cabinteely have been a real thorn in Longford Town’s side all season and the jinx struck again with the Dublin club knocking the most unlucky midlanders out of the promotion mix in a dramatic second leg showdown at City Calling Stadium on Friday night last.

The First Division rivals were clashing for the fifth time this year with Longford failing to win any of those fixtures but they should have emerged victorious in the match that really mattered.

The Town eventually lost out in a tension packed penalty shoot-out, much to the sheer dismay of the enthusiastic home supporters who comprised the vast majority of the 1,000 attendance.

Longford were left to rue some missed chances as the lack of a prolific goalscorer clearly hampered the opportunity of getting back into the Premier Division.

The cause against bogey side Cabinteely was certainly not helped by some very harsh decisions made by poor Dublin referee Alan Patchell and it was a cruel blow for interim manager Daire Doyle and his shattered players to exit the promotion race in the first round.

The corner count in the 120 minutes plus of action was 15-4 in favour of the Town who produced some fine passages of football in their bid to make further progress in the promotion battle.

While that stat tells its own story, the result went the way of Pat Devlin’s side much underestimated side who advance to meet Drogheda United in the second round of the First Division play-offs.

Why the dynamic young local midfield machine Aodh Dervin was left on the bench for so long remains a mystery, although he has been hit by injury in recent weeks. Dervin certainly made his presence felt when he was eventually introduced with five minutes gone in the extra-time period but it was not to be for Longford in this season ending defeat.

Scoreless at Stradbrook in the first leg the previous week, Cabinteely broke the deadlock  in the 18th minute when Paul Fox finished the ball to the net after Town keeper Lee Steacy produced a terrific double save to stop shots from Rob Manley and Kieran Marty Waters.

It would probably have been a completely different story had Dylan Grimes not missed a glorious opportunity of giving Longford the lead in the 6th minute when his close range shot was cleared off the line by Cabinteely defender Eoin Massey.

After piling on the pressure the Town equalised in the 41st minute when Aaron Dobbs scored from a close range header after connecting with a Jack Doherty corner and were looking the likely winners at this stage.

But a second goal failed to materialise with substitute Sam Verdon going close with a long range strike that was very well  saved by opposing keeper Stephen McGuinness in the 77th minute.

Longford had a very lucky escape in the 73rd minute when Conor Kenna cleared a goalbound shot from Waters off the line and extra-time failed to resolve the issue.

Having said that, Cabinteely had a real scare when a header from Aaron Dobbs was fumbled by McGuinness but he recovered to regain the ball that almost crossed the line in the 112th minute

Thus the promotion play-off was extended to the dreaded penalty shoot-out with Verdon converting the opening spot kick for Longford. And when Conor Keeley had the first Cabinteely penalty saved by Town keeper Lee Steacy the pressure was firmly on the Dublin club.

But Pat Devlin’s side kept their nerve to score three times through Paul Fox, Jack Tuite and Rob Manley to move on to the next round of the promotion play-offs.

Their saviour was outstanding keeper Stephen McGuinness who stopped the other Longford spot kicks taken by Jack Doherty, Aaron Dobbs and Paul O’Conor.

The Town will look back on some of the scoring chances that were squandered, most notably when Dean Byrne raced through in the 52nd minute but he shot straight at the Cabinteely keeper in what was a poor strike.

The visitors, to their credit, went close to scoring again in a couple of close calls in extra-time with Kieran Marty Waters having a shot blocked down in a goalmouth scramble while commanding central defender Conor Keeley directed a header inches wide of the post.

And so for the second time this season Longford Town have been beaten on penalties in major matches as they also suffered the same fate against Bohemians in the FAI Cup second round tie at Dalymount Park.

Luck deserted them when they needed it most but the club can reflect on a positive 2019 campaign and look forward to another crack at gaining promotion next season under a new manager. It might well be the current interim boss Daire Doyle but that remains to be seen!