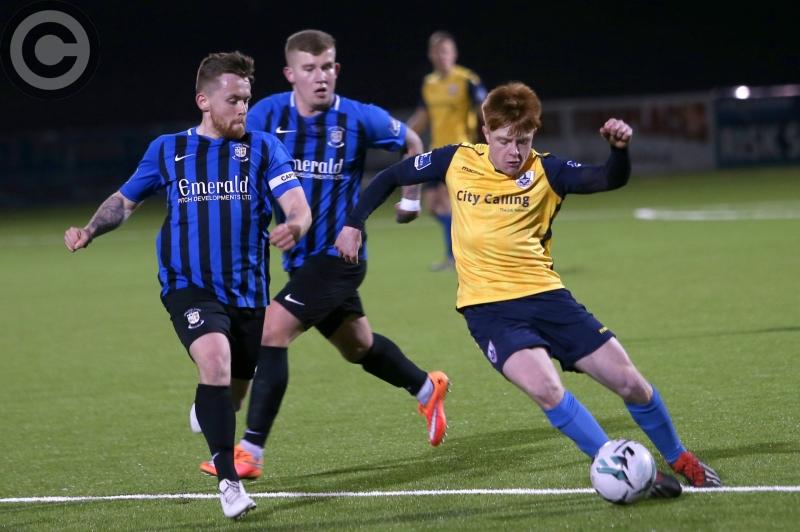 The visit of  highly rated Shelbourne to  City Calling Stadium for the vital league clash against Longford Town on Saturday should attract a big attendance, kick-off 7.30pm.

Shelbourne have been most people's favourites for the title and automatic promotion spot this season as former Bohemians player Ian Morris makes his debut as a manager in the First Division.

Over the years Shelbourne have been the team to beat in the Premier Division having played some huge games in Europe and Tolka Park was used to full houses on many occasions.

Like many other clubs Shels have fallen on poor times but this year they have a new investor and a very strong looking squad that has been boosted by the arrival of some outstanding players.

Shels have an array of top class players in their squad but the main man in the team is the vastly experienced Dean Delany who has been their number 1 keeper for many years and has lots of experience in Europe.

When Morris took over as manager he busied himself making new signings and the most impressive arrival has  to be former UCD and Dundalk striker Ciaran Kilduff who has always scored many very important goals.

The arrival of Conan Byrne from St Patrick's Athletic was a great coup for Morris as was the signing of Oscar Brennan who moved to Shels from Bohemians.

Two other ex Bohemians players Daniel Byrne and John Ross Nilson started in defence against Cobh Ramblers at St Colman's Park on Friday night last. Former Bray Wanderers player Darragh Noone also started that game as did the very impressive Karl Moore who is one of the most consistent players in the Shelbourne squad for the last few seasons.

Shelbourne are still top of the table after last weekend's games despite losing to Cobh Ramblers on a 2-1 scoreline.

Jaze Kabia and  Denzil Fernandes gave Cobh a two nil lead with goals in  the 64th and 71st minutes but Ciaran Kilduff got one back in the 85th minute from the penalty spot. Shels ended with ten men after Greg Moorehouse received a second yellow card.

The Cobh result wasn't the only surprise result of the weekend as bottom of the table Wexford, who had no wins to date, beat  Bray Wanderers at Ferrycarrig Park with second half goals from Emmett Nugent and Jack Doherty.

With the Town winning in Athlone it meant that all the top three teams were beaten at the weekend. The other surprising result was the 2-1 defeat for Cabinteely at home to a fast improving Limerick who have now joined the Town on 8 points in second place, just a point behind the three joint leaders.

Longford Town made the short trip to Athlone on Friday to take on the local side in the first midlands derby of the year. Neale Fenn made four changes from the side that played Cabinteely  two weeks earlier in the one all draw. Shane Elworthty, Mick McDonnell, Peter Hopkins and Aaron Dobbs came in for Karl Chambers, Joseph Manley, Paul O'Conor and Jamie Doyle for this eagerly awaited game.

The only goal of the game came from Sam Verdon in the 69th minute but in fairness the Town could and should have scored a few other goals but in the end three points were what was needed.

The Town played Shels three times in the League last season and the results weren't very encouraging to say the least. The first meeting was in Tolka Park and the home side won 3-2. The home side had former Town player Davy O'Sullivan playing against us for the first time and the Town's all time leading scorer was the hat trick hero for Shels with two goals coming from penalties. Sam Verdon was the Town scorer of both goals.

The second meeting at City Calling Stadium in mid May ended one all with Davy O'Sullivan scoring for Shels  in the 50th minute The Town equaliser, which was classed as one of the best seen at City Calling Stadium, came from Dylan McGlade who beat a number of players before shooting past current Town keeper Lee Stacey who was having a rare outing in the first team for Shels.

The final league game between the clubs at Tolka Park ended in a humiliating 6-1 defeat for the Town.

Greg Moorehouse will miss Saturday night's game as he received a red card late on in the defeat against Cobh on Friday last. One can  expect a cracking game on Saturday night as both teams play fast attractive football.

There is no doubt that this is the most competitive First Division for many seasons and at this stage every team is capable of beating any other team in the division.