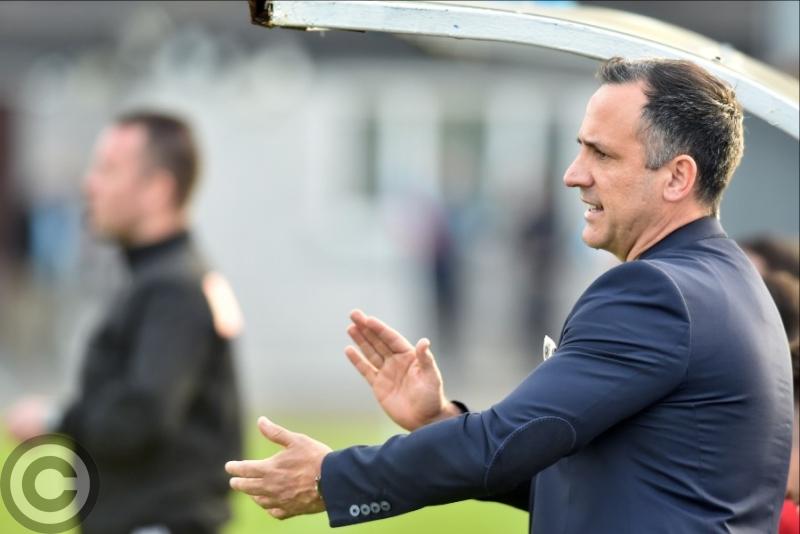 Cobh Ramblers gained revenge for their league defeat against the same opposition a few days earlier when they knocked Longford Town out of the EA Sports Cup.

A place in the last four was at stake as the clubs clashed again at St Colman’s Park on Tuesday night and Cobh advanced to the penultimate stage with Darren Murphy (43 mins) and substitute Andy Wall (88 mins) scoring the goals.

So for the first time since 1983 the Ramblers will be appearing in a National Cup semi-final and deserved their win over a Longford Town side who failed to reproduce the fine performance that saw them score a shock win away to Shamrock Rovers in the previous round.

Cobh captain Darren Murphy had a fantastic game and it was his brilliantly struck free-kick that gave the home side the lead just before the break in paving the way for the eventual victory in this quarter-final clash.

In a tight first half the Town had the ball in the back of the net early on but it was ruled out for offside. The home side enjoyed a lot of possession but failed to trouble Longford keeper Jack Brady.

The visitors created a great chance  in the 18th minute but Dean Byrne dragged his shot wide from close range. Then in the 20th minute the Town felt Ramblers keeper Adam Mylod had crossed the line with the ball when saving a Tristan Noack-Hofmann header but the referee waved play on.

Jack Brady saved from Kevin Taylor before Sam Verdon had a chance for the Town but he headed wide from a Dylan McGlade cross.

The deadlock was broken in the 43rd minute when a free-kick was awarded after Karl Chambers fouled Darren Murphy and the same player stepped up to fire an excellent strike past Brady into the back of the net.

Murphy had a chance in the early stages of the second half to score again but his free-kick just went over the bar.

As the second half progressed the Town tried hard in their search for the equaliser but the Cobh defence stood firm.  In the 80th minute Ramblers went close to getting a second goal but Stephen Christopher’s lob from the edge of the box just went narrowly wide.

In the 87th minute Town substitute Chris Mulhall had a chance to score after capitalising on a mistake by the Cobh defence but keeper Mylod was able to gather Mulhall’s poor effort.

Moments later Cobh got a second goal to put the issue beyond all doubt. Andy Wall latched on to a defence splitting pass from David Hurley on his run to weaving his way past the advancing Town keeper Jack Brady in dispatching the ball into the net.