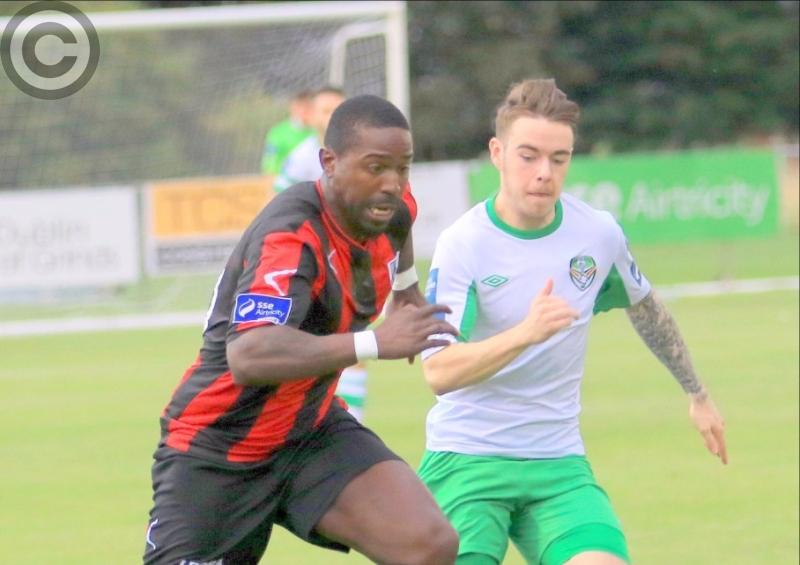 Longford Town moved up to fourth in the First Division table with a fine win away to Dublin club Cabinteely on Friday night last, the fourth success in a row for Neale Fenn’s in-form side.

Sam Verdon gave the Town the lead in the 39th minute and David O’Sullivan scored the second in the 83rd minute at the Stradbrook grounds. Longford keeper Jack Brady also saved Kieran ‘Marty’ Waters’ penalty in the first minute of second half stoppage time.

Cabinteely had the better of the chances in the first half and while the Town enjoyed possession they failed to force the home keeper Mick Kelly into making any real save of note.

Longford played some lovely football and under Neale Fenn several players have been revitalised and the team play with a confident swagger; something that hasn’t been seen in a while.

The first chance of the game came in the 16th minute; a corner from the left from Gareth McCaffrey met the head of Christian Lotefa but he headed over the bar.

Three minutes later McCaffrey linked up with Waters with the latter playing in Dean Casey but the Town were able to clear the danger.

Longford’s first chance on goal came in the 24th minute but Daniel O’Reilly’s effort was deflected out for a corner which came to nothing.

A free-kick was floated into the Town box in the 32nd minute with Kevin Knight getting a head to it but he directed his effort wide. Minutes later Waters should have opened the scoring but he blasted his shot over the bar.

Cabinteely were to rue not putting away their chances as in the 39th minute the Town broke the deadlock. David O’Sullivan played the ball wide to Don Cowan who raced down the wing before putting in a cross that was finished to the net by Sam Verdon.

Jack Watson had a shot on goal early in the second half as Cabinteely tried to get back into the game while Longford had a couple of chances to grab a second with Cowan and Dean Zambra having attempts on goal.

In the 67th minute Dean Casey had a chance to level matters but he shot wide. Then two Town substitutes had chances; Jake Kelly should have done better with his effort in the 76th minute while three minutes later Kaleem Simon’s header just went wide.

The Town eventually scored a second goal in the 83rd minute through David O’Sullivan. Simon turned provider playing a neat pass into the path of O’Sullivan and he made no mistake to slot the ball into the back of the net.

Cabinteely tried to pull a goal back and with six minutes of additional time allotted they started to apply some pressure.

One minute into stoppage time the  home side were awarded a penalty with Jack Brady facing Waters but the young Longford Town keeper made the save to keep his net intact.