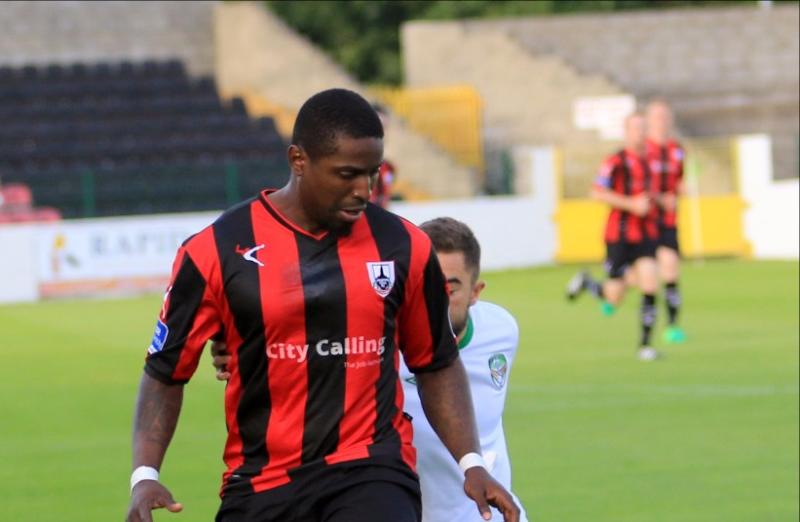 Longford Town left it very late to score the only goal of the game against Cabinteely at City Calling Stadium on Saturday night last but all that matters is the result in a winning start for new manager Neale Fenn.

Watched by the official attendance of 327, the Town were frustrated in their attempts to find a way past the excellent opposing keeper Michael Kelly but they eventually broke the deadlock in the 85th minute with a cracking strike from defender Daniel O’Reilly.

Having lost and drawn with Cabinteely in their two previous games this season, this was Longford’s  first win over the South Dublin club in the Airtricity League.

O’Reilly’s winning goal materialised after he picked the ball up on the edge of the area and hit a wonderful volley that flew past the Cabinteely keeper into the back of the net.

The first chance of the game fell to the Town in the 16th minute but the flag was raised for offside.  On the half hour mark Cabinteely had a chance to score but Town netminder Paul Skinner did well to come out and clear the danger.

In the 37th minute Karl Chambers went close for the Town.  Aidan Friel’s cross fell to Chambers at the back post but his effort was saved by Kelly and while the Longford player had another chance he was again denied by Kelly.

Five minutes from the break Evan Galvin fired his shot over the bar when he was in a good position for the visitors. Galvin had another opportunity for Cabinteely in the 56th minute but he couldn’t direct his header towards the target.

Then in a Town attack Friel played the ball into Kevin O’Connor but his effort sailed over the bar.  Manager Neale Fenn decided to make changes and introduced both Cody Mulhall and Enda Curran in the 60th minute in a bid to boost the attack.

Mulhall’s first piece of the action came minutes later when he linked up with Friel and while the Town defender got through with only Kelly to beat, the Cabinteely netminder produced a fine save to keep his net intact.

The Town were dominating possession and the pressure was finally rewarded when Daniel O’Reilly struck to score the winning goal with a tremendous finish with five minutes of normal time remaining.

Cabinteely tried hard to grab the equaliser and in the 88th minute they created a chance but were unable to find a way past Paul Skinner.

Cody Mulhall then found Karl Chambers as Longford threatened to score a second goal  but his lob over Kelly flew over the crossbar.

While Cabinteely produced a strong finish in forcing three corners in a row, it came to nothing as Longford Town held out for the win that moves them up to fourth in the First Division table.

The loyal Longford supporters went home happy in the knowledge that their side have now extended their unbeaten run to five games in closing the gap on First Division league leaders Waterford FC to 12 points and who are the opposition for the next game at City Calling Stadium on Saturday week, July 15.

Longford Town are away to UCD this Friday night and will be approaching the tough fixture at the Belfield Bowl in a confident frame of mind.