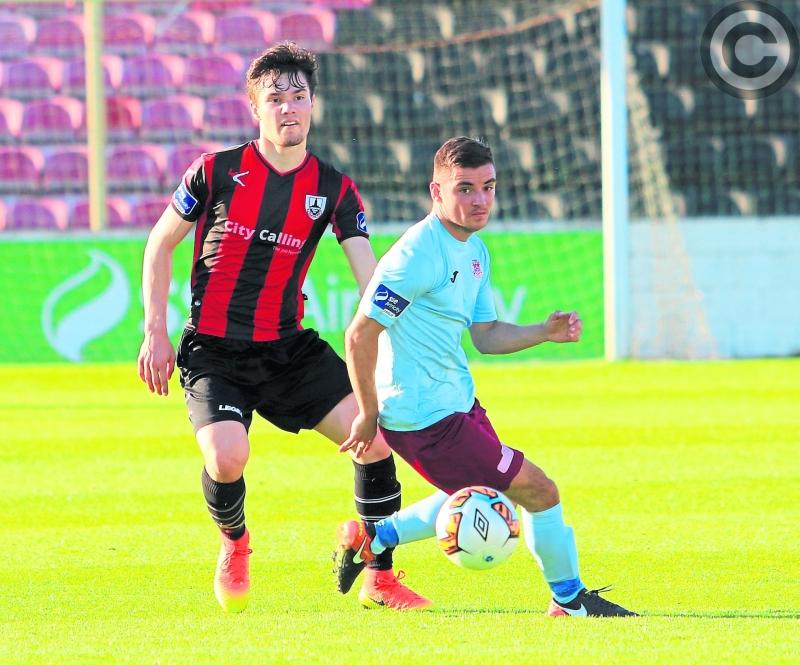 Longford Town served up a very late, late show at City Calling Stadium on Saturday evening last when late goals in both halves sealed a valuable win in the First Division.

The Town went into the game minus the services of Daniel O'Reilly who was suspended and his place was taken by Noel Haverty who was making his first appearance in months and he gave his usual competent performance in the centre. The only other change from the scoreless Shelbourne game was Karl Chambers starting in place of Gavin Boyne.

This game had a very lively start with both teams trying to play attractive football. On the half hour mark, Town full back Aidan Friel made a run down the right wing beating three players and he unleashed a left foot shot that went inches past the post with former Town keeper Paul Hunt well beaten.

On 35 minutes Dylan McGlade went on a run and his shot flew past the post with Hunt looking on helplessly. The Town had a let off  five minutes later when left back Tristan Noack Hoffman lost possession at the back but his defensive team mates cleared the danger.

A minute later the Town had a let off when Cobh number 10 Abbott broke through and his goalbound shot was cleared for a corner by centre half Stephen Walsh who had a marvellous game. Cobh left full Kyle McNamara was causing many problems for the Town defence as he pushed forward at every opportunity.

It looked as if the teams were going to go in scoreless at half-time but the Town had other ideas. Tristan Noack Hoffman pushed up to the halfway line and he played the ball to Dylan McGlade who sent in a great cross from the left and Karl Chambers got over the big defenders to head an excellent goal past the helpless Hunt in the Cobh goal. The referee blew the half time whistle and the Town went in as deserved leaders.

In the 48th minute, goal scorer Karl Chambers beat two defenders but his shot on the run was well saved by Hunt. A minute later Kealan Dillon, who was having one of his best games for the Town, his shot beat keeper Hunt but the ball flew past the post. Karl Chambers who was enjoying himself on the right beat two defenders and his pin-point cross was cleared by a defender.

The visitors equalised in the 84th minute when slackness in the Town defence allowed a cross into the box and substitute Dean Swords headed in the equaliser in off the bar. Enda Curran replaced Kealan Dillon a minute later with Don Cowan moving out to the right.

It seemed that this game was going to end one all but the Town team kept pushing forward and the visitors defence were penalised for an infringement out on the right. Jake Kelly took the free kick and the ball flew past the bewildered Paul Hunt in the Cobh goal to give the Town back the lead in the 93rd minute.

The referee blew the final whistle a few moments later to the delight of the very small crowd who enjoyed a real end to end game.

This result pushed the Town to within a point of fourth placed Cabinteely, who were beaten by league leaders Waterford last weekend, and next up for Longford is the midlands derby away to Athlone this Friday evening.