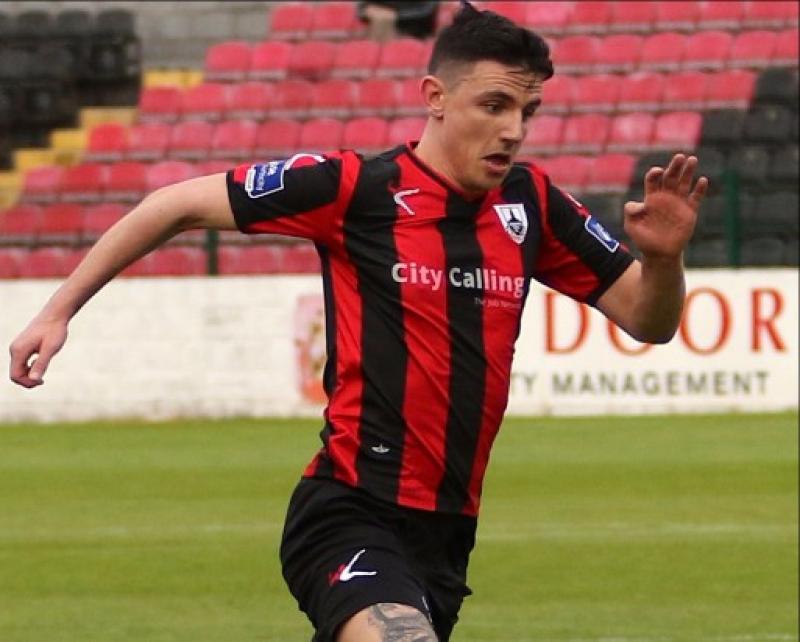 Longford Town striker Enda Curran, who was forced to retire injured in the 33rd minute of the league game against Waterford.

Struggling to make any sort of impact in the First Division all season and a cause of great concern for manager Alan Mathews, the tale of woe continued for Longford Town as they lost out to table toppers Waterford at the RSC on Friday evening.

Few can argue with the fact that the midlanders league title hopes are now in tatters following this severe setback which leaves them 15 points behind the firm promotion favourites Waterford approaching the halfway stage in the season.

The Town knew they had to achieve a positive result at the RSC to put some pressure on Waterford but it was not to be with Derek Daly’s well struck goal very early in the game deciding the outcome in front of the official attendance of 1,294.

The Town had the first chance in the 6th minute but Daniel O’Reilly headed over from a Jake Kelly corner. Dylan McGlade was the next to come close for the visitors; Tristan Noack-Hofmann with the cross but McGlade’s effort went just wide of the target.

Longford were left to rue those missed chances when Waterford broke the deadlock in the 12th minute in capitalising on a poor defensive clearance that went astray. Derek Daly latched on to the ball from about 25 yards out and beat the Town keeper Paul Skinner with a clinical shot to the corner of the net.