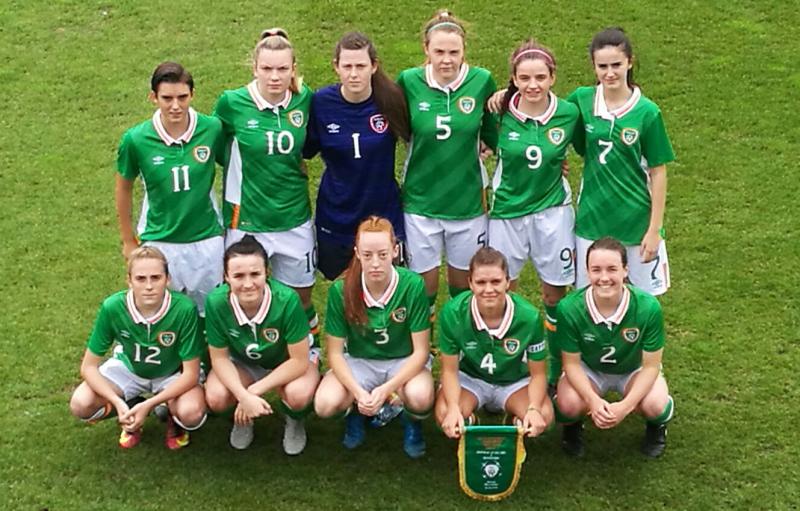 Two goals from Leanne Kiernan and a superb team performance saw the Republic of Ireland Women's Under 19s record a 2-0 victory over Wales to book their place in the Elite Round of qualifying for the UEFA European Championships.

In what was their second Group 2 game, Dave Connell's team ensured that they retained top spot by overpowering their opponents with a goal in either half from in-form striker Kiernan.

The win - which came on the back of the 10-0 defeat of FYR Macedonia - was enough for them to confirm their place in the next round before even taking on Italy in their final Qualifying Round game on Sunday.

"I'm delighted for the players because they have deserved the two victories. Now we want to finish what we came here to do and top the group," said head coach Connell.

"It's important that we keep the continuity going and the belief that we can beat the bigger teams. Italy are next and they will be another challenge for us, but there is no reason why we cannot overcome them too.

"To qualify for the Elite Round is important for the development of our players because they get to play against best teams. We started this campaign with a task of winning six games; we are two down now with two wins so we are going well.

"Our belief, when setting out at the start, was that this group of players is good enough to reach the finals in Northern Ireland. We now have to keep working hard to achieve that but the girls have done brilliantly."

Over the course of two games Ireland have unloaded 55 shots on goal and pinned their opponents back inside their own half of the pitch while dominating possession and linking play with swift passing - all hallmarks of Connell's style of management.

The players have responded well to those positive tactics with Saoirse Noonan holding up play cleverly, Jessica Nolan and Alex Kavanagh bursting forward at specific moments, and Roma McLaughlin controlling the tempo as if she were a master puppeteer.

The contributions of each player stood out, from Amanda McQuillan's leadership between the posts, the security provided by the back four, and the defensive covering from Niamh Farrelly. Yet Kiernan caught the eye again.

Blessed with lightning pace, Kiernan was like Roadrunner as she raced away from her marker to open the scoring on 25 minutes. The Shelbourne Ladies hotshot then added to that with another finish on 46 minutes.

Those two goals proved to be the difference on the scoresheet, but Ireland were the better team in every area and it is why they will be competing in the Elite Round early in 2017.