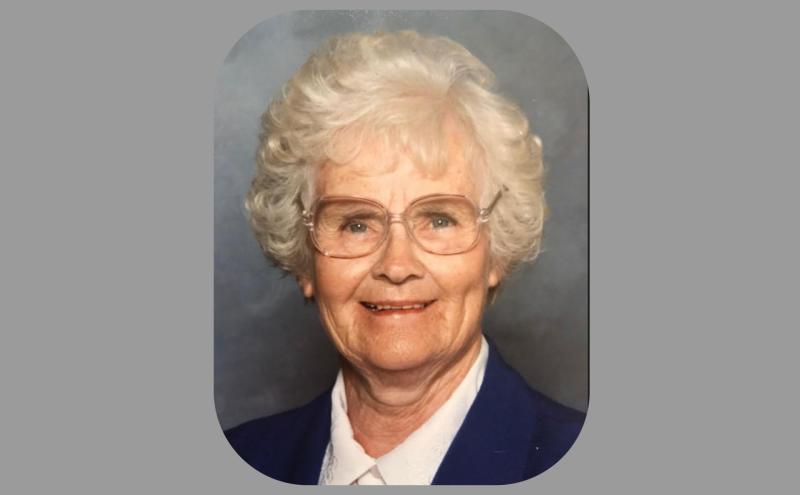 Baptised Teresa, Sr Brigid was born in Shannon Harbour, Co Offaly. One of her teachers in primary school was later to become mother to Fr Aidan Ryan, one of the concelebrants at her Funeral Mass.

Predeceased by her brothers Michael, Jack, Gerry and Brian, Sr Brigid will be sadly missed by her sister-in-law Josephine (Banagher), her nieces, nephews, grandnieces, grandnephews, her Mercy Community and a large circle of friends.

A quiet and unassuming lady whom everyone loved, a lady of great faith, she always got on so well with the students she taught over the years.

She spent her secondary year school years as a boarder in Ballymahon and entered the Mercy Community there in September 1942. When a new foundation was made in Lanesboro in 1953, Sr Brigid was one of the first three Sisters to be part of that foundation.

She was back in Ballymahon when a new mission was launched in Columbia, Missouri in 1960 and in 1962, Sr Brigid joined the sisters there.

She taught in the Grade school in Columbia and also in Kirksville and Fulton before moving to other Mercy schools in Lakeworth and Palm Bay, Florida.

When she returned to Ireland she became part of the Mercy Community in Longford and lived happily there until moving to Nursing Home care in Innis Ree Nursing Home, Lanesboro.

Sr Brigid died peacefully in the loving care of the staff of Innis Ree and surrounded by her loving family and members of her Mercy Community.

She lay in repose at Longford Convent Chapel on Thursday, February 14 where many people came to sympathise with her family members and with the Sisters of Mercy and to join later with priests and all present in Evening Prayer.

Her removal took place on Friday morning for Funeral Mass in St Matthew’s Church, Ballymahon  following which she was interred in the Convent Cemetery there.

The organist Padraig McGowan, Ballymahon and the lovely Ballymahon Choir enhanced the Liturgy with beautiful and music and song while Sr Brigid’s grandniece Orla sang the Responsorial Psalm.

A lovely tribute was read by her niece Margaret, quoting from words in tribute by Sr Carmel McEnroy, Mercy Sisters and ending with a lovely poem composed by Sr Brigid’s nephew, John.

The simple things
She cherished the most
Like a game of cards
Or receiving the Host.

Shannon Harbour
Was never the same
The day Tess joined up
And took on a new name.

But it was for the better
As so many would gain
A lifetime spent teaching
Brigid found it no strain.

Home in the Summer
And stories were told
Missing the warmth
Brigid dreaded the cold.

A mind of her own
Right to the end
A very special person
And everyone’s friend.

Your journey has ended
Back where it started
Reunited once more
With family departed.

(John and Margaret, Grehan family).
May her dear Soul rest in peace.