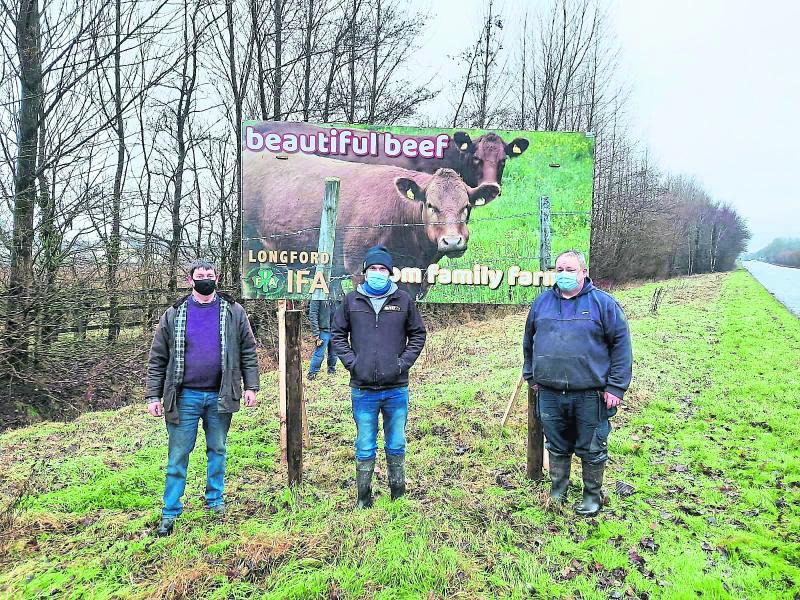 Longford IFA members were delighted that their innovative roadside billboard campaign to promote farm families and to highlight the value of local food production was mentioned in the Dáil last week.

Deputy Joe Flaherty said the posters emphasise the diversity of the sector in County Longford with beef, sheep, chicken, tillage and egg producers all featuring prominently. “A number of the posters feature local farm families and serve to remind us, the consumers, that local farm families, farmers, neighbours and friends, depend very much on the choices we make when we go into our supermarkets.”

Deputy Flaherty said he hoped the Longford initiative could be replicated in other counties. “There is certainly a sense of pride for us in Longford as we pass by the posters on the road. We can see the Waters family from Gowlan in Killashee who produce our milk, and the O'Halleran's at Loughill in Kenagh, who produce our free range eggs. These are our food producers. These are our neighbours and our friends. For us the consumers there is an instant and recognisable connection.”

The Ceann Comhairle replied, “there are shades of "Three Billboards Outside Ebbing, Missouri" there for Longford.”

Agriculture Minister Charlie McConalogue said he was aware of the campaign in Longford and he commended it on emphasising the importance of local produce. “I hope that others follow the lead on that.”

Longford IFA Chairperson Gavin White was delighted their campaign was highlighted in the Dáil and he thanked Deputy Flaherty for speaking about it. “We look forward to other counties following our lead,” commented Mr White.