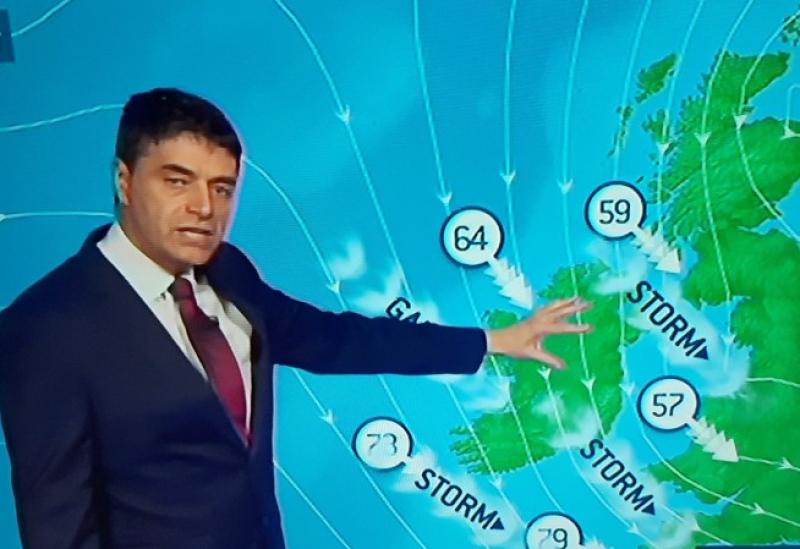 Met Éireann has warned the public to stay safe because Storm Atiyah is set to bring storm force winds to all of Ireland.

In his Met Éireann forecast after the RTÉ news on Saturday, meteorologist Gerry Murphy gave the latest on what to expect from the storm which has given rise to Status Orange and Yellow weather warnings.

Also read: Gardaí in Cavan investigating fatal road traffic collision between a lorry and a car

The Orange wind warning applies to counties on the west coast with stormy, severe damaging gusts expected. However, Mr Murphy cautioned people in the rest of the country that a Status Yellow wind warning will mean very strong gusts of up to 110 kms per hour.

He said Storm Atiyah began to move in on Saturday night but the worst of the weather would be seen through Sunday and into Monday.

"We are going to see very stormy, extremely tight gradient strong winds on on west and south coasts tomorrow afternoon extending to all parts during the evening and then gradually clearing on Monday," he said.

The meteorologist said gale force winds would impact the west by noon but these would increase to storm force by evening.

"The strongest peak winds will be over Munster and Connacht as we go through the afternoon and the early evening and then extending over Ulster and Leinster through the evening and night," he said.

He said seas and waves would be high with showers frequent. He urged people to be aware of the weather. He urged the public to be careful in all activities.

Mr Murphy urged the public to stay in touch with weather forecasts on www.met.ie

Due to a combination of high seas and storm surge there is a possibility of coastal flooding.

West to southwest winds will reach mean speeds of 50 to 65km/h with gusts of 90 to 110km/h in places this evening, tonight and Sunday.

Status Yellow - Rainfall warning for Donegal
Rainfall accumulations of 30 to 40mm expected during the period.