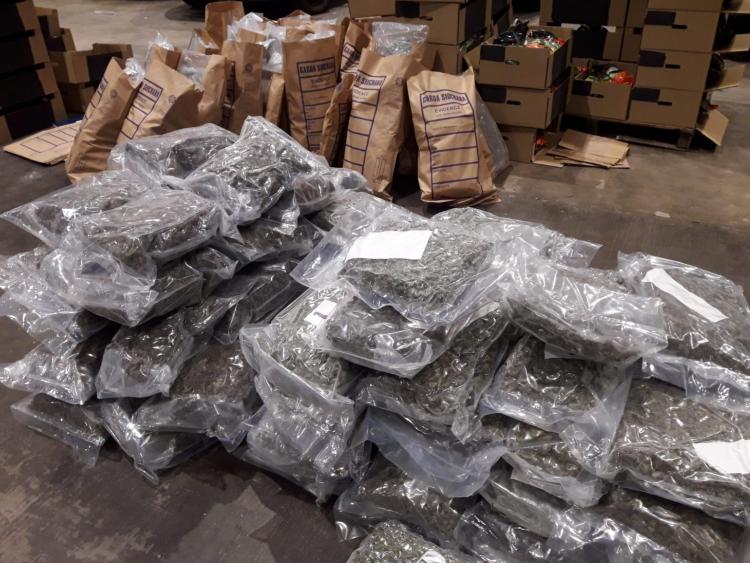 Gardaí attached to the Garda National Drugs and Organised Crime Bureau (GNDOCB) intercepted a commercial haulage vehicle in Ballymascanlon, Dundalk, today and following a search of the vehicle, cannabis herb with an estimated street value of €3.2 million was recovered, subject to analysis.

The cannabis herb was concealed within a legitimate load of fresh vegetables.

Two men (aged 57 and 42 years) from the UK and Northern Ireland were arrested on suspicion of drug trafficking and are currently detained at Dundalk Garda Station under the provisions of Section 2 of the Criminal Justice (Drug Trafficking) Act, 1996.

This operation is part of ongoing joint investigations being conducted by the Garda National Drugs and Organised Crime Bureau (GNDOCB) and the National Crime Agency (NCA) of the UK under the auspices of the Cross Border Joint Agency Task Force (CBJATF) targeting cross border organised criminal activity.

Assistant Commissioner John O’Driscoll of Special Crime Operations said: "This very significant seizure of drugs is yet another success arising from ongoing cooperation between the Garda National Drugs & Organised Crime Bureau and the UK’s National Crime Agency as we jointly protect our communities from drug trafficking.”