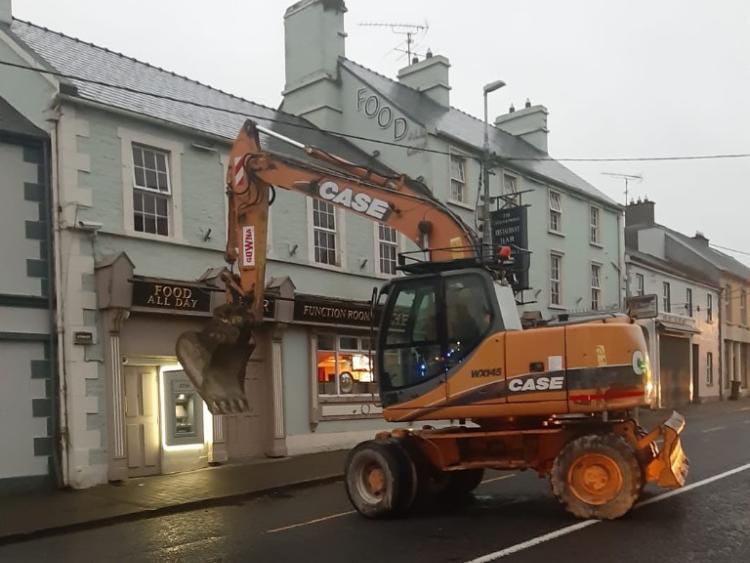 Scene of the attempted ATM raid in Virginia, Co Cavan

Gardaí recovered in excess of €300,000 and seized a number of vehicles following yesterday's foiled ATM raid in county Cavan.

At 2:30am yesterday morning (Wednesday, August 14) detective and uniform gardaí from the Cavan/Monaghan Garda Division assisted by colleagues from the National Garda Units intercepted an attempted theft of an ATM at Main Street, Virginia.

One 28 year old male was arrested at the scene and is currently detained at Carrickmacross Garda Station.

A second 25 year old male was arrested in Virginia on Wednesday and is currently detained at Bailieborough Garda Station.

Gardaí are continuing to conduct enquiries to locate a third suspect.

The scene at Virginia was  technically examined by Scenes of Crime Examiners from Cavan/Monaghan Garda Division.

Separately a connected search operation took place  at Moynalty, Co Meath. A 61 year old male was arrested during this operation and is currently detained at Kells Garda Station.

During the search in Moynalty in excess of €300,000 was recovered. In addition a number of vehicles have been removed for further examination.

Gardaí are continuing to conduct an examination and search at this location. This remains a live investigation and it is anticipated that further searches will be carried out in the immediate future.

An incident room has been established at Bailieborough Garda Station.

Gardai are appealing for anyone who travelled the Virginia/Bailieborough Road and/or were in Virginia town between 0100hrs – 0300hrs pn Wednesday morning particularly any driver with a vehicle with dashcam footage to contact the incident room at Bailieborough Garda Station (042) 9694570, the Garda Confidential Line 1800 666 111 or any Garda Station.