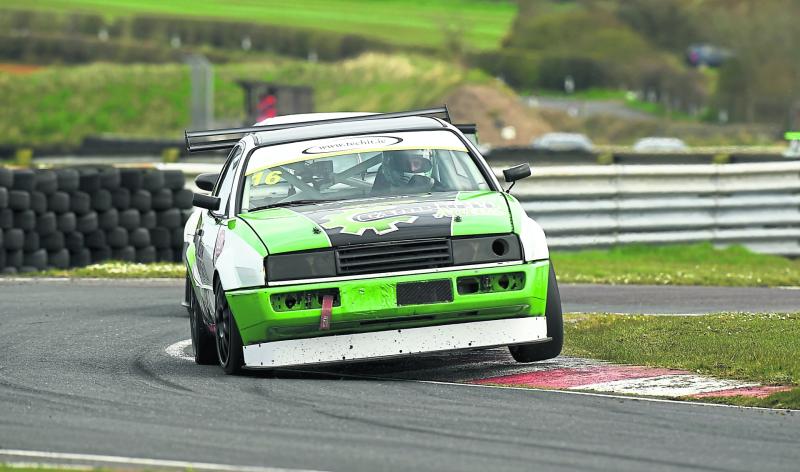 Two county Down men Ciaran Denvir and Stephen Potter, were new to the grid this year having only raced in the Northern Ireland championship in the past.

It was Denvir who needed to try and get ahead of his county man as Potter won at Mondello Park last time out.

Indeed, he did that by claiming pole position over Longford’s Keith Campbell, who won the races outright at Mondello Park by 0.881 of a second. Potter was back in third 1.3 seconds off Denvir.

It wouldn't all be plain sailing for any of the ITCC drivers as they were mixed in with the Irish Supercars, Seats and Closed Wheeled Libre classes. So getting through the pack could cause problems during the race.

It was Keith Campbell in his Volkswagen Corrado who made the best start and grabbed the lead going into turn one, with Denvir behind.

Robert Savage continued his run of good form by taking up third position and having a race long battle with Gareth Hayden in fourth.

Stephen Potter however, got caught up in between the Irish Supercars and dropped down to fifth in ITCC, not what he wanted.

Then by lap four Denvir made his move and got past Campbell but in doing so it was under yellows flags and subsequently the results are provisional.

Once past he broke clear and won by 3.8 seconds with Savage in third. Although Potter finished fifth on the road, he took second place points in the 'A' class but it would not be enough as his fellow Honda man took the championship and deservedly so as he was the benchmark for others all year.

With the 'B' Championship already decided at the last round the only other class to be decided was class 'C' between Tony Gallagher and Daniel Faherty. Gallagher made the best start and managed to gap Faherty as they mixed with the supercars.

By the time Faherty got through the gap was too big to close down leaving the final race of the year to decide the championship.

Organisers decided to separate the starts between classes for race two of the weekend and for spectators it was a good job they did, as it left it a straight fight between all in each class.

Ciaran Denvir knew his road tyres were no good for the wet conditions and immediately dropped down the field as the lights went out. Carrickboy driver Keith Campbell led the field out of turn one from Gareth Hayden, Jay O'Reilly and Robert Savage.

With track conditions wet and cool there was not much grip out there and especially on the international loop.

Campbell still led by lap four but by now Savage had got by Hayden and O'Reilly and was pushed hard to get into the lead.

Hayden had dropped back so it left the front three to battle it out for the lead swapping it several times over the course of the race. Savage made his move again on lap seven going into Parabolica but ran wide and let Campbell through. further on the same lap as they went through Birrane's Bends, O'Reilly went wide on to the grass and let the front two gain a slight advantage.

By lap nine Savage was again in the lead and looked to have the measure of Campbell. Then drama, with a lap to go Campbell ran wide at turn 7a and let Savage get up his inside but as he came back across the track he clipped the front left wheel of Savage's Honda and broke the rim and drive shaft.

Just as it looked like Savage would take his maiden win he was denied but showed he is now one of the front men for next year.

Campbell had enough of an advantage over Jay O'Reilly to make it home to take the win with Gareth Hayden in third.