Longford SFC Final reaction: Hard work is the cornerstone on which Mullinalaghta’s success is built 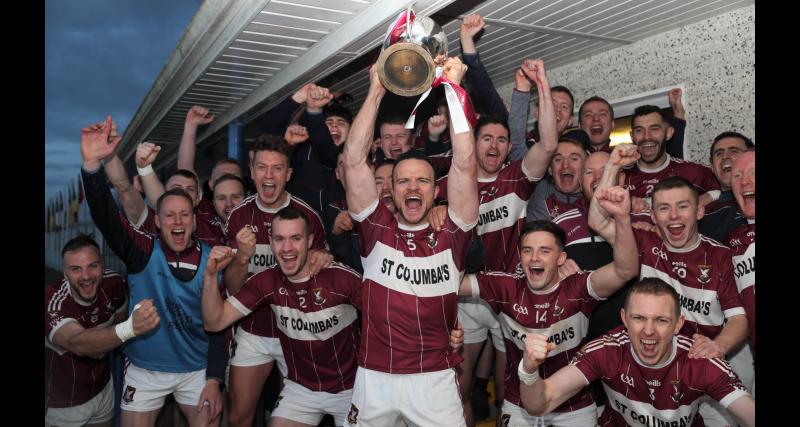 Mullinalaghta St Columba’s captain Donal McElligott won his fourth senior championship medal last Sunday. He has also won a Leinster club title and captained the Longford senior footballers. Yet, he was grounded and measured when he reflected on his team’s latest county final victory over Mostrim.

“The margins are so small in the Longford championship,” commented Donal.

Despite all the success he has enjoyed, McElligott referenced one of the bad days when speaking to the Leader.

Speaking about their opponents Mostrim, he stated “2014 was our first time in the present period to make it through to the final and we lost to Killoe. Mostrim will be disappointed. But they have had a great year, they were the form team coming into this final.”

McElligott and his defensive colleagues shut up shop on Sunday, leaving it almost impossible for Mostrim to find a way through. Their collective efforts were summed up by a brilliant block by the captain himself in the first half.

“We were very aware of the danger that Mostrim held up front. Defence starts at number 15 for us. It means tracking back and then going forward when we can,” he explained.

His side missed a goal chance just before half-time. However, they atoned for it by registering three quick fire points at the start of the second half period, to leave them 0-9 to 0-3 in front. The task for Mostrim became immense at that stage.

“We could have gone chasing a goal after we missed that chance, but we decided to chip away by scoring points,” he commented.

Hard work is the starting point for this Mullinalaghta side. “Work is the cornerstone of everything that we do. We aim to outwork the opposition,” he explained.

Two Cavan natives, one familiar to them, the other a new face, have added great value to Mullinalaghta this season.

On Cian Mackey’s impact on the field, McElligott stated, “Cian has slotted in with us. He is cool and composed. He covered a lot of the pitch today for us. He brings a lot of experience.”

On the return of former manager Mickey Graham as one of the mentors, he remarked, “It is great to have Mickey back. Ciaran Fox got the right people in place in our set-up. They are all working towards the same goal, and we have maxed out on everything.”

Donal was joined on the Mullinalaghta starting team on Sunday last by his brother Aidan. In previous years, one or both of his other brothers Ruairi and Conor would have been playing.

Their younger brother Cian is a member of the current St Columba's squad while Ruairi is now club chairman, which underpins the huge contribution the McElligott family have made to the club.

“Conor was not involved this year, nor were Kevin Mulligan and JJ Matthews. But these lads have battled away hard for us in the past. Small rural clubs like ours have pockets of families involved,” he stated.

With Donal McElligott, it is never just about the players, as was emphasised in his speech, which mentioned many people in the parish who had helped out.

Speaking to the Leader post-match, he took time to remember “sick people in the parish and also a few people we have lost.”
That is the Mullinalaghta way, nobody gets left behind.