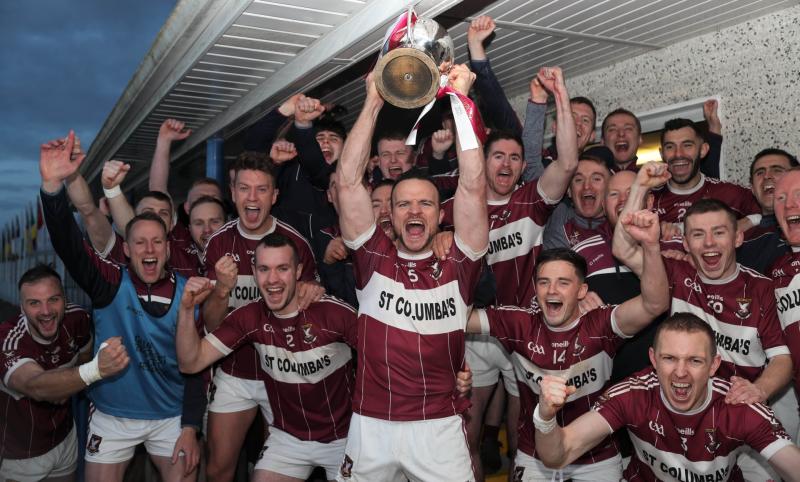 In collecting the Connolly Cup for the fourth time in the space of six years, St Columba’s now have their sights firmly fixed on the Leinster Club campaign with the first round clash at home against the Wicklow champions Blessington on Sunday November 21.

While just three points separated the sides at the break, 0-6 to 0-3, Mullinalaghta should have been further in front with Jayson Matthews missing a glorious chance of a goal in first half stoppage time.

Matthews flicked a pass from Aidan McElligott wide of the post in what was a very lucky escape for Edgeworthstown but superior Mullinalaghta stepped up another gear in the early stages of the second half to extend their advantage.

A brace of points from David McGivney (mark and play) was followed by a further score from attacking defender Shane Mulligan but Mostrim managed to remain in contention thanks to two brilliant scores from Darragh Doherty.

Trailing by 0-9 to 0-5, there was still a glimmer of hope for the underdogs but another couple of scores from David McGivney (free and play) consolidated St Columba’s tight grip on the game.

Mostrim were outscored 0-4 to 0-1 during the remainder of the match and their tale of woe was complete when they were reduced to 14 players after Seamus Hannon was sent-off for a second yellow card foul in the 57th minute.

Former Cavan star Cian Mackey was the Mullinalaghta playmaker throughout the final and received the man of the match award.