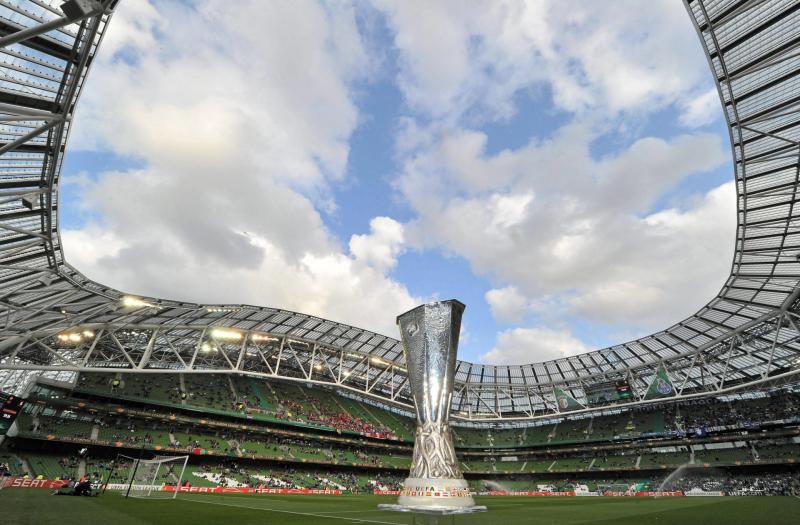 The Football Association of Ireland is delighted to announce that following talks in London last weekend, UEFA’s Executive Committee has awarded the staging of the 2024 UEFA Europa League final to the Aviva Stadium in Dublin.

The game will mark the second occasion the Aviva Stadium has hosted the UEFA Europa League final after Porto beat fellow Portuguese side Braga 1-0 in the 2011 decider.

Longford Town are in action at Dalymount Park this Sunday (kick-off 4pm) in their bid to cause an upset against Bohemians in the SSE Airtricity League Premier Division.

FAI Chief Executive Officer Jonathan Hill and President Gerry McAnaney confirmed the news after meeting with senior UEFA officials in London ahead of the final of the 2020 UEFA European Football Championship at Wembley Stadium.

Announcing the decision, CEO Jonathan Hill said: “This is really positive news, not just for Dublin but for Ireland as we prepare to host such a major football event and showcase the Aviva Stadium and Irish hospitality to the world in 2024.

“We were all disappointed when the COVID-19 pandemic saw the four UEFA EURO 2020 games moved away from Dublin so this really is something to look forward to just three years from now. The 2024 UEFA Europa League final will be a landmark event with huge economic benefits for Dublin and for Ireland along with the boost it will give our game in the build-up to the final.

“On behalf of the Association, I want to thank UEFA for awarding this final to the Aviva Stadium and I particularly want to thank the Irish government, Dublin City Council, Sport Ireland and the Aviva Stadium for their ongoing support. Together we are committed to bringing global events to our capital city and we know Dublin will put on a great show in 2024.”

FAI President Gerry McAnaney added: “UEFA assured us that the Aviva Stadium would be in the running for a major European final when it became clear that the COVID-19 pandemic would force the abandonment of plans to host the four UEFA EURO 2020 games scheduled for Dublin this summer. They have been true to their word and we can all look forward now to a truly magnificent event at the Aviva Stadium in 2024 and one Irish football will be proud of. We look forward to welcoming the best of European football to Ireland in just three years’ time.”

The Minister for Tourism, Culture, Arts, Gaeltacht, Sport and Media, Catherine Martin TD, and the Minister of State for Gaeltacht and Sport, Jack Chambers TD, have also welcomed UEFA’s announcement in relation to the awarding of the 2024 UEFA Europa League final to Dublin.

Minister Catherine Martin stated: “I am delighted to hear the news this evening that Dublin has been chosen by UEFA to host the 2024 UEFA Europa League Final.  It is the second time that the city has been chosen to host this prestigious event. After the disappointment of not being in a position to host the EURO 2020 games, this is very welcome news and will give all football fans in Ireland a boost.”

Minister of State Jack Chambers said: “This is a real vote of confidence in our hosting capabilities from UEFA.  The experience gained in preparing to host the EURO 2020 games will assist Dublin in hosting a fantastic UEFA Europa League Final in 2024.  We look forward to assisting the FAI over the next three years in the staging of this major sporting event which will showcase the Aviva Stadium, Dublin City and Ireland to the rest of Europe.”