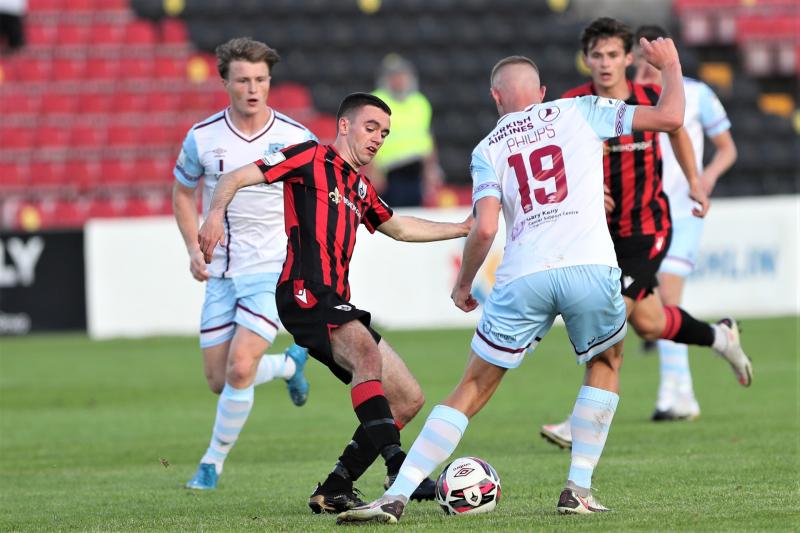 Longford Town are in action at Dalymount Park this Sunday (kick-off 4pm) in their bid to cause an upset against Bohemians in the SSE Airtricity League Premier Division.

This is the third meeting of the clubs in the top flight this season with Bohs holding the upper hand with a draw and a win over the other team in red and black.

Bohs, who are currently in fourth position in the league table, played the second leg of their Europa Conference League fixture against Stjarnan from Iceland at the Aviva Stadium on Thursday evening.

With an attendance of six thousand permitted, Bohs produced a brilliant display to win 3-0 in advancing to the second round after drawing 1-1 in the first leg the previous week.

Thus the Dublin club will be in a very confident frame of mind for the league game against Longford Town.

When the sides clashed at Dalymount Park earlier in the season, Bohs were 2-0 ahead after just 26 minutes with Georgie Kelly and Ross Tierney on target but the Town battled back to snatch a draw in a dramatic finish.

Substitute Conor Davis, who was brought on in the 70th minute, scored both goals for Longford who  might have snatched a winner with Bohemians under considerable pressure in letting the expected victory slip from their grasp.

Bohs made no mistake in the second fixture at Bishopsgate, winning 2-0 with English midfielder Liam Burt breaking the deadlock in the 26th minute.

After creating some good chances, the Town were made to pay for poor finishing when Ali Coote scored the second goal for the visitors in the 74th minute.

There is no doubt that Longford will need to be at their best in the hope of getting something from this extremely difficult game and it will take 90 minutes of total commitment.

The Town were without midfielder Aodh Dervin and central defender Mick McDonnell (both suspended) for the 1-1 draw at home to Drogheda United on Saturday night last.

Dervin will make his return against Bohs but McDonnell is banned for another game after his red card in the recent game against Waterford at Bishopsgate.

The Town had two new players in the squad for the fixture against Drogheda with midfielder Darren Nugent and striker Dean Williams joining the club on loan from Shamrock Rovers for the rest of the season.

Both Nugent and Willians were pitched straight into the starting team on Saturday night and there is no doubt that the duo will give Daire Doyle a stronger hand in the quest to collect vital points in the relegation battle.

Matthew O’Brien was brought on in the 60th minute for Paddy Kirk in a tactical change and he showed some great promise despite his youth.

Defender Joe Manley, who is getting an extended run in the team, has played very well in recent games alongside Aaron O’Driscoll who is having a great season.

Once again, Dylan Grimes was the shining light on the Town team but he was forced to retire injured in the closing stages of the game against Drogheda after suffering a bad tackle.

While Bohemians will be hard to beat at Dalymount Park, the two games in Europe might take the edge off them for the league fixture and maybe Longford Town have a chance of coming away with a positive result.