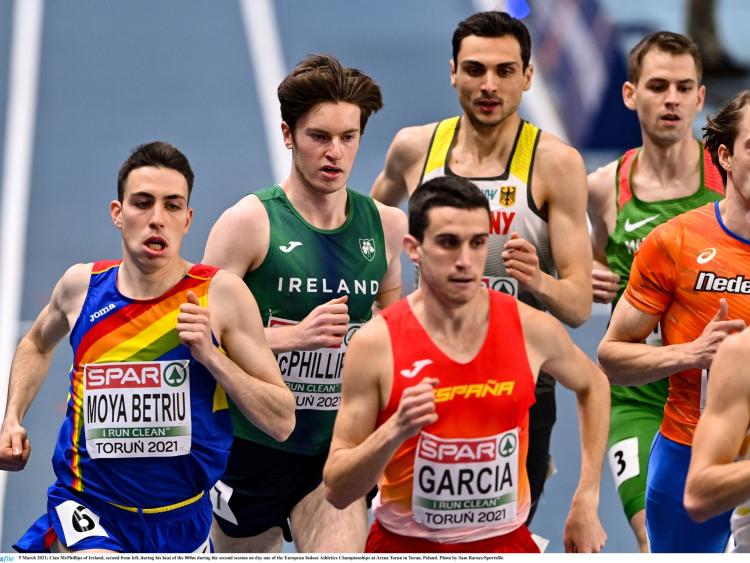 Longford’s Cian McPhillips will be up against three of Europe's top ten 800 metres runners in this evening's semi-finals of the  European Indoor Championships in Torun, Poland.

Last night, the pride of Longford, comfortably qualified for the semi-final from his heat in a time of 1:49.98.

Cian will be running in semi-final two which will be screened Live on RTE 2 TV from 6.33pm.

Unlike last night's heat where the first three earned qualification, just the top two will qualify from the three semi-finals for the showpiece final.

Speaking to David Gillick on RTE shortly after his run in the heats last night, Cian admitted, "I'm feeling quite tired at the minute. The air is quite dry in here obviously and the mask isn't helping.

"Happy out with how I ran. It didn't go as planned. I was hoping to be on the leader's shoulder. They went out quicker than I anticipated but I was happy to be able to get back."

Gillick suggested to Cian, that in his debut senior international run, he had shown maturity by covering all the moves ahead of the final lap?

"I knew I had to make a move at that stage," replied Cian, "because I was falling behind and I knew the guys in front me had good kicks so I needed to be up there and pushing on to them and luckily a gap opened up and I was able to move into it."

And was he nervous ?

"I'm quite young. So I've another few years left in me, I think, of running. I didn't come with too many expectations, so I'm just happy to be here but obviously I'm just not here to make up the numbers. I'd like to push on and do as well as I could, so I'm happy to make the semi's."

Ireland will also have a big interest in semi-final 3 of the 800m at 6.42pm as it features Mark English.

Semi-final 2 Line-up and their PBs

Cian McPhillips looks back on his big run in the 800m at the European Indoor Championships. #torun2021 pic.twitter.com/Cqwtm2wOWe

Cian McPhillips, at just 18, reaches the semi-finals of the 800m at the European Indoor Championship after a controlled run in the heats. #torun2021 pic.twitter.com/ShLpAudhzk