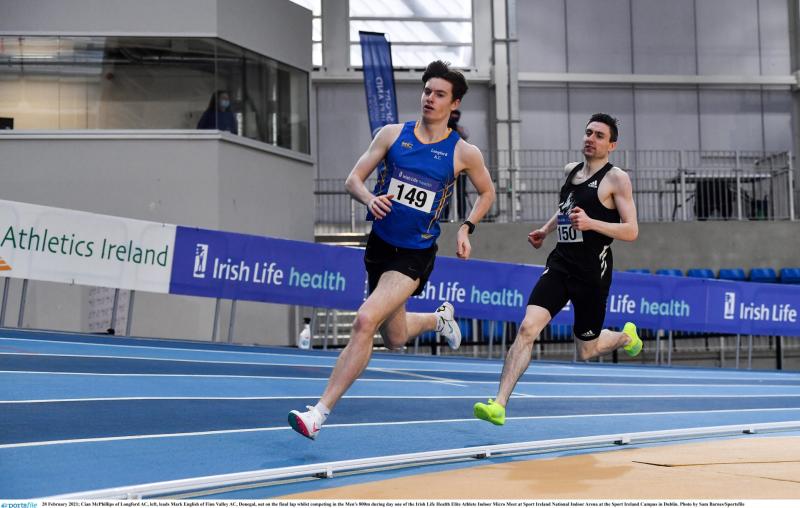 Cian McPhillips was the talk of the athletics world on Saturday after his record breaking exploits in the 800 metres race at the Elite Micro Meet in the National Indoor Arena.

The sizzling performance by the Longford Athletics Club member may not have been enough to win his battle royale with the vastly experienced Mark English, however, it did earn him his first opportunity to represent his country at senior level.

The qualifying standard for the European Indoor Championships 800m is 1:48.25 and Cian eclipsed that by over two seconds, clocking a magnificent time of 1:46.13, a National U20 & U23 record.

Did he expect to run such an impressive time?

“Kind of,” he reveals, adding, “I was really going for the European standard. I had run a 600m time trial a couple of weeks ago and it was quite good and based on that I thought I might run about 1.47 but I didn’t really expect to run a second quicker than that.”

An indication of the high standards Cian sets for himself is that the 18-year-old was slightly disappointed he didn’t manage to beat double European indoor medal winner Mark English, who won their incredible duel by setting a new national senior record.

“Mark is a fantastic athlete, the best Ireland has,” Cian said. “He is very fast and powerful and to try to beat someone like that the best way to do it, is to go out as hard as you can from the very start. I was very lucky we had a pacer in the race that brought us around very nicely up to 400m and after that it was up to me to keep going by and I ended up pacing Mark to 700. He did breeze by me and I was lucky that I was able to reel him back in a bit.”

The race was paced through 500m by Kevin Woods (Crusaders AC) and swift 27-second laps setting it up for a quick time. Third place was John Fitzsimons (Kildare AC) and he also achieved the European standard.

How did Cian feel immediately after the race? “You are absolutely dead at the end of these races. I couldn’t move.”
Confirmation came on Monday of his inclusion in the Irish squad for the European Indoor Championships in Torun, Poland from March 5 to 7, and he is looking forward to the trip.

“It will be a great experience to go and run against the seniors. It is fine running a race like Saturday but it is a whole different ball game when you are in a race against guys that are just as quick and if not, far quicker than you.”

Cian says he is ‘surprised’ by the remarkable progress he has made in the 800m but says the 1,500m is his favourite distance.
In February 2020, following an invite from fellow Longford man Ray Flynn, Cian won the High School Mile in front of over 5,000 spectators at New York’s Armory Arena as part of the schedule of races at the Millrose Games.

On Saturday, Ray tweeted his congratulations and spoke of his pride at Cian's achievements, while another Irish athletics legend Eamonn Coghlan suggested that the young Ardagh native may be the next Longford man to break the irish mile record!

“The support is fantastic. I’ve known Ray for a while now. He was the guy that got me into the Millrose Games and I met Eamonn there as well. It is great to be able to hear their stories.”

Cian believes the Millrose Games experience stood him in good stead. “The more experiences you can get like that the better. Especially to go running in a championship, to go travelling and getting yourself ready and to make sure you are doing everything right.”

Leaving Cert student Cian, displaying maturity beyond his years, dismisses talk of him being a future senior medal winner. “I try not to pay much heed to any of that just now. There is no point because there has been plenty of athletes that have run far faster than me and they have never gotten anywhere so it would be foolish to make assumptions this early.”

He says lockdown has been fine for him. “I’ve no commute to Moyne so that gives me more time in the mornings. I’m able to get some of my runs in before school starts (virtually).”

With no competitive racing for a long time, Cian said it gave him the opportunity to up his training regime without fear of injury or missing out on any event.

“You really see the dividend of that about six months after. You also can’t run races like I did on Saturday without training on a track which is really difficult with travel restrictions but Athletics Ireland got me on to a list of athletes that are able to train in Abbottstown and I have to thank them.”

He says he is very lucky to have an excellent coach in Joe Ryan from Mullingar. Cian added, “Joe is probably the best coach in Ireland I’d say and he’s got a fantastic group of athletes that I can train with all the time. I never really train on my own at all which is really the only reason I’m still in the sport because it is very tough. If I was trudging around the Ballymahon canal on my own I don’t think I’d be enjoying it as much as I am now.”

He heaped praise on the influence of Longford AC and his dad, Paddy, on his career.

“He (his dad) was involved in everything. He would bring me up to the Ardagh soccer pitch and have me running laps before an All-Ireland. He was the chauffeur and counsellor and I wouldn’t be here without him and he has played a massive role in my development.

“Longford AC are the reason that I’ve been in this sport. I joined them when I was about six and I had great coaches early on and made great friends. They are in the middle of fundraising for a new indoor complex. They’ve raised €72,000 and they need €200,000 and hopefully the bit of publicity that I got might contribute to their efforts because they have done an awful lot for me and lots of other athletes. We are a very small club, in a small county but we are punching well above our weight in terms of how many medals, and national and international athletes we have.

“Longford AC has had its ups and downs. We’ve had good athletes in the past in Ray Flynn and Enda Fitzpatrick. Then we went a bit flat for a few years but we’ve kind of gone through a golden age in the past ten years, with lots of different athletes, Nelvin Appiah and Yemi Talabi and I’d probably be one of them, putting the club back on the map again.”

Currently, Cian is ranked No 8 in Europe on 800m times run this season while Mark English is at No 7. Mark won silver in 2015 and bronze in 2019 at the European Indoors and it will be very interesting to see how he and Cian fare out in Poland.

No matter what transpires, Cian won’t be resting on his laurels. “There is always something big every year. I’ve the European senior indoors and then the next big focus for me is the European U20 Championship in mid July in Tallinn, Estonia and the European cross country championships which are being held in Dublin in December. That will be the next target and then after that I’m out of junior, I’ll be in the senior category so I’ll be hoping to qualify for various European and World senior championships and maybe in time, the Olympics.”