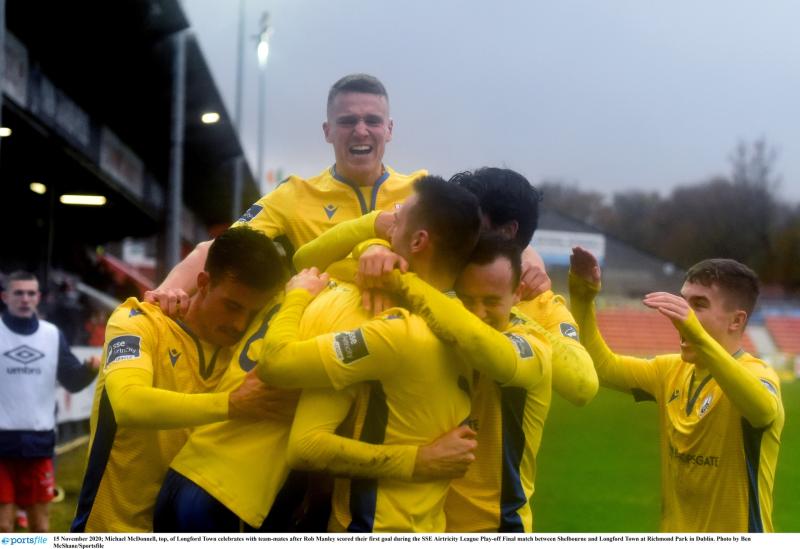 A goal from Rob Manley in the 54th minute saw Longford Town make a return to the Premier Division with defeat over Shelbourne in the promotion/relegation play-off final at Richmond Park.

The result was no more than Town deserved and they really saved the best until last with their performances in the play-off games against UCD, Galway Utd and now Shelbourne.

It was a display full of character and determination with defender Joe Gorman an absolute rock throughout.

Town bossed the first half but for all their possession they didn’t create too many scoring chances. Both keepers had a quiet opening half.

In the 20th minute Aaron McNally did very well to cut inside, he played the ball across the goals but there was no one there to turn it in. Rob Manley was proving a handful for the Shels defence while the Dublin side tried to catch Town out on long balls over the top but nothing to trouble Town netminder Lee Steacy.

In the 26th minute Dean Zambra played the ball to Rob Manley but he was upended in the box by Luke Byrne. The Shels captain received a yellow card for his trouble and having already been earlier was shown a red.

Manley dusted himself down but blasted his penalty over the bar; a real let off for Shelbourne. In the 33rd minute Aodh Dervin’s cross met the head of Manley put his effort was easily gathered by Shels keeper.

Town started the second half like they had the first and showed a real steel in their tackles. In the 54th minute they broke the deadlock when Dylan Grimes played the ball into Joe Manley and he made no mistake shooting past Brady.

Shels had a chance minutes later to equalise but Mark Byrne headed over. Manager Ian Morris then made a triple substitution in the hope his side could get back into the game.

In the 89th minute Ryan Brennan’s effort was saved by Lee Steacy with Joe Gorman clearing the loose ball. Shane Elworthy and Joe Gorman were called into action late on to halt Shelbourne as Town held on for a memorable win.