De Town that loves him so well! 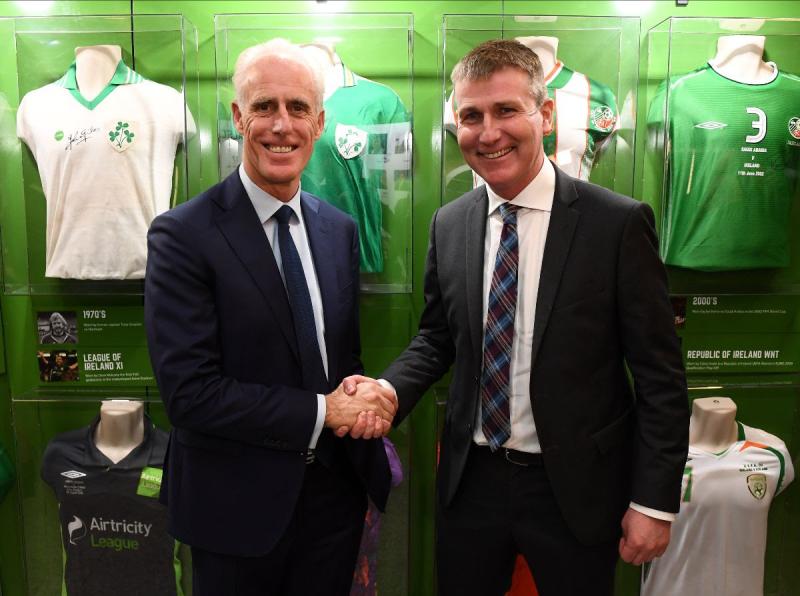 Long-time Longford Town fans have been beaming with pride since the announcement by the FAI that ‘one of their own’, Stephen Kenny, has officially taken over the Republic of Ireland managerial reins from Mick McCarthy.

After much contractual speculation, the handover was agreed with both men in light of the delay to the European Championship play-offs caused by the Covid-19 pandemic.

McCarthy’s contract was due to expire on July 31 after the UEFA EURO 2020 finals, with Kenny, the former Longford Town, Derry City and Dundalk manager, initially scheduled to step up from his Under-21 team role on August 1.

According to the FAI, this move allows Stephen Kenny time to plan for the European Championship play-off semi-final against Slovakia later in the year.

In the summer of 1998, Donald Keogh was a Longford Town committee member when a 26-year-old Kenny rang him and asked to be interviewed for the manager’s job at the club. The club agreed and the interview took place in Edgeworthstown’s Park House Hotel.

“He looked the part and he sounded the part,” remembered Donald, adding, “Stephen arrived with a file of stuff and he told us, the interview committee, about Longford Town!”

De Town, languishing in the first division, had little to lose and they took a calculated gamble and it paid off.

Donald reflected, “We’re the club that gave him his chance. When people talk of Stephen Kenny and where he came from, we’re part of his story.

“And Stephen knows that too. He’s always welcome back here and he did transform the club.”

Tiernan Dolan is another die-hard Town fan that observed Kenny at close quarters and he credits him with restoring pride in the club. “As the youngest manager in the League of Ireland, he transformed Longford Town. He steered them from the bottom of the First Division to promotion to the Premier Division and onwards to represent Ireland in Europe ( his first European experience).”

Tiernan said Kenny’s charisma rubbed off on everyone. “He was a favourite with supporters because after games he'd meet with them and listen attentively to considered opinions. He also visited schools to spread his own passion and to build support. In short, he restored pride.”

And what will Kenny bring to the Irish job, Tiernan, replied: “He has a super footballing brain, his attention to detail is extraordinary and he's a brilliant person manager. Longford Town are proud to have given him his first taste of management and immensely proud of his recent, deserved promotion.”

Under Kenny’s guidance, Longford ended the ‘98/’99 first division season in fourth, and the following season, they gained promotion to the Premier Division, narrowly missing out on the title behind Bray Wanderers.

"I have fond memories of Stephen's time as manager of Longford Town FC and the major impact he made will never be forgotten.

"The club were struggling at the bottom end of the First Division but the arrival of the then unknown Kenny changed all that. Everything he planned was carried out in a professional manner and his confident approach quickly translated into positive results.”

Padraic regarded Kenny as a shrewd operator. "Stephen always had a great eye to spot a talented player and made some very shrewd signings to assemble a squad good enough to challenge for promotion.

"Guiding Longford Town into the Premier Division 20 years ago was a great achievement for Stephen and a massive high in the history of the club.”

He also recalled the run to the cup final. "Getting to the 2001 FAI Cup Final against Bohemians at Tolka Park with Stephen at the helm was another memorable occasion for Longford Town supporters, despite the disappointment of defeat.

"Great consolation came in qualifying for Europe and what Kenny achieved for the club was nothing short of remarkable.
"I wish him well during his reign as the manager of the Republic of Ireland senior side. What was once a dream has now become a reality for a man that started his coaching career with Longford Town FC."

Meticulous, ambitious, personable and decisive are, according to another Town fan and commentator Tony Ghee, attributes that Kenny possesses in abundance.

Tony said Kenny was always well prepared and he constantly set targets for himself and his players. He was never afraid of making the tough decisions and had no problem in giving young players an opportunity to impress. Tony recalled that it was Kenny who gave Vinny and Paul Perth, Sean Prunty, John Rogers, Paul McNally, Henry Kenny, Stephen Kelly, Alan Murphy and Digger O’Brien their chance to make it.

And he believes that while Mick McCarthy stuck with the tried and trusted, that Kenny, along with his coaches, Keith Andrews, Damien Duff and Alan Kelly, will spread the net significantly wider in their search for younger talent.

Tony remembered how Kenny visited his late father, Michael, another Town stalwart, and the 2001 UEFA Cup tie against FC Lovech.

“He brought European football to Longford and he brought this club into the community. He recognised the importance of community and he galvanised Longford Town.”

Here’s hoping Stephen Kenny can replicate his magic with the Republic of Ireland.