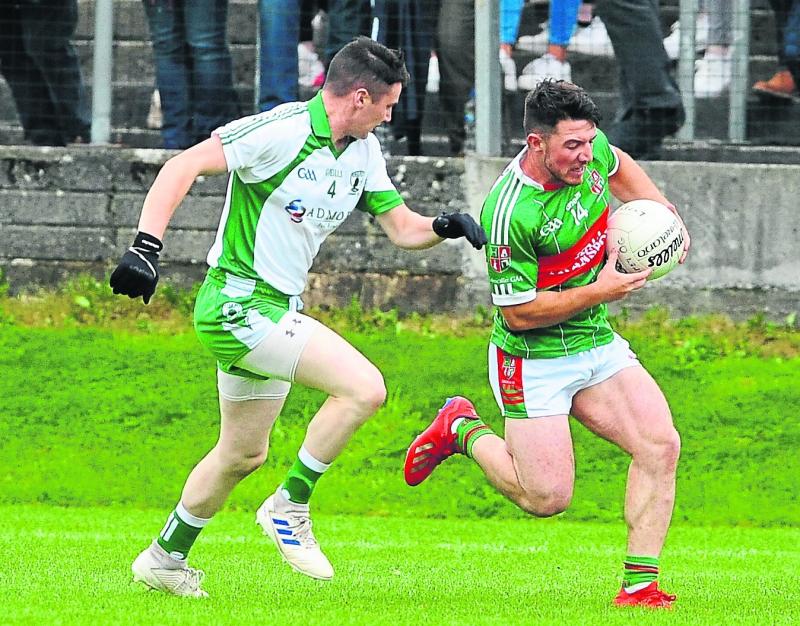 The kick outs were very precise, and it looked as though they were straight from the training ground. During his abbreviated time on the field, Kiernan was imperious on Killoe kick outs, and was directly responsible for the two important scores, that really set Killoe up for success here.

The second one was of the soft variety, but the net doesn’t ask how the football arrived into its fabric.

Kiernan can catch high ball, unerringly, and when he is well placed, and tuned in, he’s generally unbeatable.

That said, he wasn’t a one-man storm on the Killoe team; Mickey Quinn played marvellous football, Padraig McCormack was absolutely superb, and Daniel Mimnagh also excelled. Time and time again Padraig saved Killoe from being breached, as Colmcille continued to lob balls into the square area as the clock ticked towards closure.

They’re a good team, they’ll come again, and can still land the big prize. For once, they came up against a team also boasting a new manager, and Tomas Donoghue has also transformed Killoe. This was a strange game, in which Colmcille demonstrated their lack of experience more than once.

The referee was Fergal Kelly, a decisive and consistent official. A man who doesn’t do drama, doesn’t seek the limelight, and never has a noticeable talk with players. Maybe other referees could follow some of his attributes....they’d benefit.

One could even say that he wasn’t obtrusive, although he brandished several yellow cards, and two blacks.

Very smooth, courteous, and no speeches to players. Fergal seems to get it, that they’re not all infants.