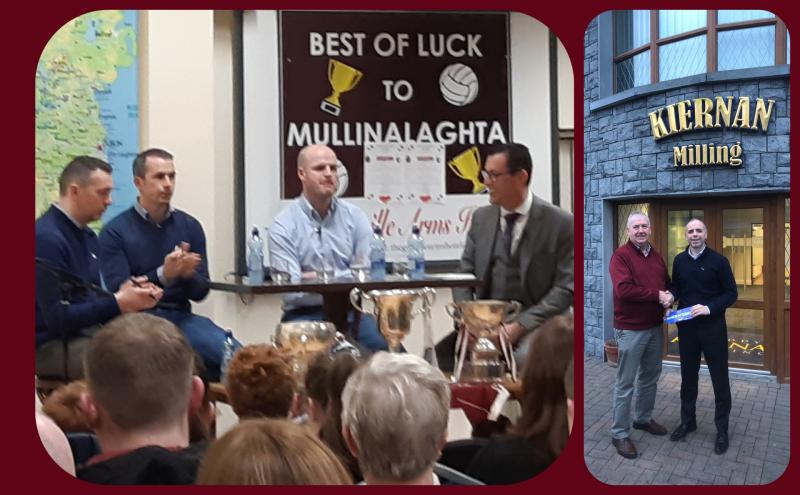 The three well known pundits and former inter-county stars, were giving their views at a special preview night earlier this week in Kiernan Milling, Granard, and they suggested that Mickey Graham's Mullinalaghta possess the necessary mettle and talent to upset the odds once again, just as they did in the Leinster Final by taking the scalp of Dublin kingpins Kilmacud Crokes.

Oisin McConville, Dessie Dolan and Dick Clerkin were in conversation with MC John Duffy during a highly entertaining preview event at Kiernan Milling that attracted a large attendance and Garreth Carroll, on behalf of Kiernan Milling, thanked the panel for their insights, those who supported the event and he wished Mullinalaghta every success in their quest to become the first Longford club to ever reach an All-Ireland club senior showdown.

McConville, the winner of ten Ulster and six All-Ireland titles with Crossmaglen Rangers, along with sixteen Armagh county titles, one All-Ireland SFC medal, one NFL medal and seven Ulster SFC medals, remarked that he felt the Munster club championship was the least competitive of the four provinces and that Dr Crokes wouldn't have been tested as severely as they would have liked ahead of today's game.

He pointed out that the key for Mullinalaghta was to win the midfield battle, push up on the Crokes kick outs and make tackles, and to not give them the freedom they enjoyed in the Munster club campaign.

An All Star winner in 2004, Dessie Dolan also won his only Leinster SFC title with Westmeath that year. He is the holder of seven Westmeath senior club medals and in 2011, he helped Garrycastle win a Leinster club title.

He attended secondary school in St Mel's College and described Longford's former long serving defender, Dermot Brady, who was present in Kiernan Milling, as they toughest and fairest opponent he marked throughout his career.

Dessie's father, Dessie Snr, trained many Longford club sides, including Killoe and Ballymahon, so he said he was very familiar with the Longford scene.

He spoke of how impressed he was with the way in which Mullinalaghta dealt with the hype and media attention that followed their Leinster Final victory.

He said team captain Shane Mulligan spoke very well, was grounded and focused, and added that this talented Mullinalaghta were experienced, they were on a journey, and similar to his own Garrycastle, they had nothing to fear.

Dick Clerkin's inter-county career with Monaghan spanned from 1999 to 2016 and he won Ulster SFC medals with the Farney County in 2013 & '15, and he spoke of the similarities between his own club Currin and Mullinalaghta.

He said Dr Crokes were a fine team but that Mullinalaghta have every chance particularly if they could start well and ensure the Kerry are contained and prevented from playing expansive football.

The serious business of predictions aside, there was plenty of tall tales and banter over the course of the evening.

Mullinalaghta Chairperson John Keegan thanked Kiernan Milling for organising the event, the expert panel of Oisin McConville, Dessie Dolan and Dick Clerkin, MC John Duffy, and those who attended for their support.

Garreth Carroll, on behalf of Kiernan Milling, Granard, who are celebrating forty years in business this year, presented a  cheque for €6,800 - raised over the course of 13 days - to the Mullinalaghta St Columba's club to help defray some of the expense they have incurred throughout their incredible club run that has given everyone associated with Longford GAA a huge lift.