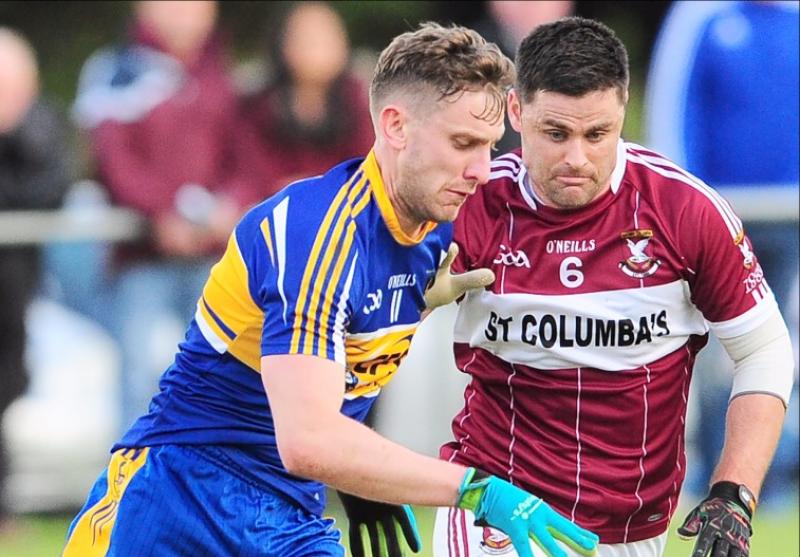 Ronan McEntire on the attack for Dromard in this tussle with Mullinalaghta opponent Shane Mulligan. Action from the recent Senior Football Championship Group 1 game at McGee Park. Pic: Declan Gilmore

The final round of fixtures in the group stage of the Senior Football Championship are scheduled for this weekend and most of the interest will be focused on the meeting of Dromard and Longford Slashers.

With Mullinalaghta and Killoe already through to the last eight, the remaining quarter-final place in Group 1 is a straight shoot-out between familiar rivals Dromard and Slashers with the losers making their exit from the championship.

A draw will suffice for Slashers to keep them in contention for the Connolly Cup after finishing all square with Killoe in the previous round.

The indications are that Dromard may just have the edge if they can reproduce the same sort of determined display in the unlucky one point defeat against the title holders Mullinalaghta the last day.

There are a few permutations in Group 2 to decide who advances to the quarter-finals and even if Clonguish lose to already qualified Abbeylara their superior scores difference should be enough to get them across the line.

After losing to Abbeylara and Clonguish, the odds would appear to be stacked against Carrickedmond but a win over Mostrim in their remaining group fixture could change the picture dramatically.

A Mostrim draw or victory will settle the issue but if they happen to lose and Clonguish overcome Abbeylara then Carrick will qualify on the head-to-head regulation with the Edgeworthstown outfit missing out. A tense situation might well materialise!

By virtue of their comfortable win over Killashee last weekend, Colmcille join Abbeylara, Killoe and Mullinalaghta in the quarter-finals with a game to spare and that is against Ballymahon who are battling it out with Fr Manning Gaels for a place in the last eight.

The Gaels scored a great win over Granard on Saturday evening last and the Drumlish/Ballinamuck side are strongly fancied to beat St Brigid’s Killashee in their remaining group fixture.

Whether the result will be good enough for the Gaels to make further progress remains to be seen as they are depending on Colmcille beating Ballymahon.

If that happens to be the case then scores difference will determine who will finish second in Group 3 in an exciting conclusion to the league stage of the championship on Sunday evening when the draw for the quarter-finals will then be made after the Clonguish v Abbeylara game at Maguire Park, Ballinalee.