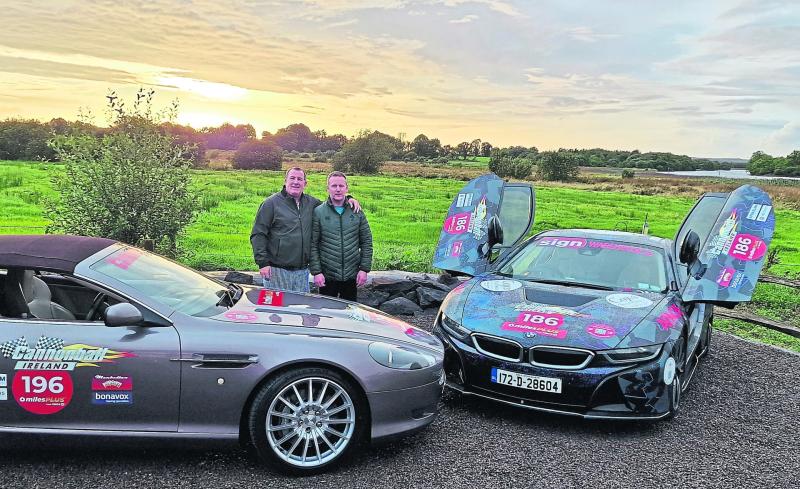 Two Longford motoring enthusiasts are lining up to take part in a freewheeling spin around Ireland in a three day driving extravaganza.

Joe Neary and David Binns will be behind the wheels of their Aston Martin and a BMW i8 for the three days of automotive frolics.

Cannonball Ireland is an annual gathering of supercar drivers who take to the road in convoy on an adventurous and picturesque trip around the country to raise funds for charity.

This year 215 supercars and novelty cars roar through the highways and byways of Ireland with side shows, free family festivals, and a host of celebrities as they cover over 1,000km of Irish tarmac.

Cannonball Ireland has raised €1.3 million for Irish charities and over 200,000 excited spectators have witnessed the coast to coast amusements before the final waving of the chequered flag.

This year's run starts on Friday, September 9 when the classy supercars take off from Malahide Castle. They make their way down to Cork before heading west and finishing the day in Killarney.

A slimmer who transformed her life by losing three stone and using her success to help other people change their lives and achieve their weight loss dreams too is getting ready to celebrate six years doing her dream job.

The team park up in Kerry for the night. Saturday's rout takes them up country, through Limerick and Galway before finishing for the night in Sligo. Sunday they head for Trim in Meath via Lanesboro and Ballymahon.

The group have raised over a million for different charities in recent years. They generate great excitement as the McLarens, Lamborghinis, Ferraris, Ford Gts, Aston Martins, Porsches, Maseratis, Rolls Royces and Bentleys and more cruise through different Irish villages.

Joe Neary is looking forward to the run: “This year's event is the biggest one that has ever taken place in Europe. There are two from Longford, or more precisely two from Clondra,” the supercar fan explains.

The event has been growing in popularity since the first run in 2009. Though loosely based on the cult ‘Cannonball Run’ series of movies from the 1980s that saw supercars race across the US, Cannonball Ireland is a less chaotic affair.

Organiser Alan Bannon emphasises the camaraderie and friendships forged amongst the drivers and participants: “Some have participated for 10 years, some dip in and out, some make it the experience of a lifetime but newcomers are always welcome.”

It's not a low cost adventure. Many of the participating cars cost over €100K, so the €2,500 entry may appear paltry to the drivers.

The selling point for participants is the luxury experiences, breath-taking drives, incredible cars and, mixing with like minded petrol heads.

“I'm sponsored by Coxs Steakhouse in Dromod. The Cannonball stickers are being put on at the moment,” Joe says of the distinctive decals that will mark participation in the run, “David's are in the post, but he will have them in time for the run.”

This year drivers will be raising money for the HOPE Foundation, the Irish charity working with street children in Kolkata, India. HOPE funds and operates over 60 projects including 11 child protection homes, a hospital, an ambulance, counselling, food and nutrition programmes and education and healthcare.