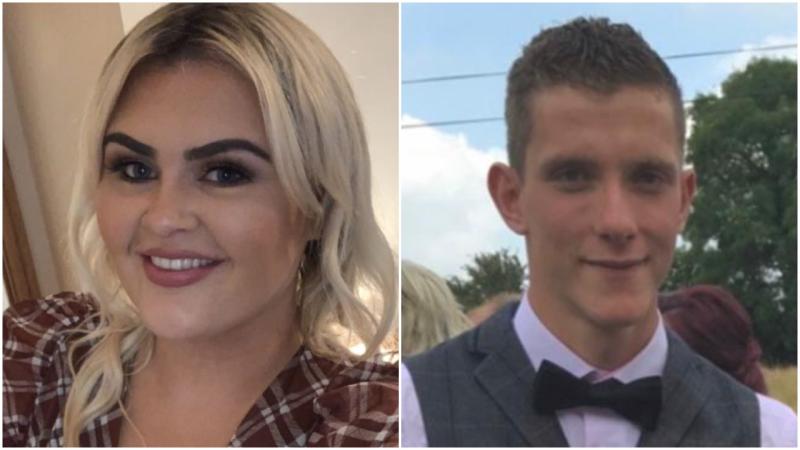 The late Saoirse Corrigan and the late Shane Gilchrist, both from Castlepollard, Co Westmeath

It is a dark day for heartbroken Midlands GAA communities as they mourn and pay tribute to 'two beautiful souls' - Saoirse Corrigan, Whitehall, Castlepollard and Shane Gilchrist, No. 1 Cionn Torc, Castlepollard - who died in a devastating car crash on New Year's Eve.

Westmeath clubs - Castlepollard Hurling Club, Ringtown GAA, Castlepollard Camogie Club and Castletown Finea Coole Whitehall GFC - have all posted poignant Facebook tributes remembering Saoirse and Shane who were among three people, in their 20s, who died in a crash in Co Meath.

Two cars collided on the N52 slip road in Kells, just off the M3 motorway, at around 4.45pm on New Year’s Eve.

Another female, the driver of the second car involved in the collision, died and her passengers, three juveniles, were hospitalised.

Castlepollard Hurling and Camogie Clubs posted that "a terrible tragedy engulfed our community yesterday,  as two of our young beautiful souls were tragically taken from us decades too soon. Castlepollard Hurling & Camogie Club would like to extend our deepest sympathies to the Gilchrist, Murray, Corrigan and Coffey families. Shane and Saoirse were both stalwarts in the Castlepollard and Ringtown Hurling Clubs and extended communities. Our hearts are broken for your loss in this most difficult time. May their gentle souls rest in peace."

Ringtown GAA said club members "are all in shock and devastated with the tragic death of our beautiful friend and club member Saoirse. We remember especially all her family members and her partner Shane who also sadly died in the accident RIP."

Castletown Finea Coole Whitehall GFC described it as 'a dark day in our community'.

The club posted: "With great sadness all at CFCW offer our condolences to the families and friends of Saoirse Corrigan and Shane Gilchrist, who have tragically been taken away from us far too soon. Both, devoted members of their local GAA Clubs Saoirse and Shane will be greatly missed by Castlepollard Hurling Club, Ringtown Hurling Club and CFCW GAA and the much wider community. Our hearts go out the Gilchrist, Murray, Corrigan and Coffey families at this difficult time. Ar dheis Dé go raibh a n-anamacha."

Saoirse is predeceased by her grandfather Michael and she is deeply regretted by her loving mother Orlene, loving father Michael, Andy, Keri, brothers Cathal and Cillian, sisters Brónagh and Gráinne, grandparents Michael-John, Josephine and Beatrice, uncles, aunts, extended family, all the staff and students at St Clare's College, Ballyjamesduff and a wide circle of friends.

Funeral arrangements are yet to be announced.

Our school community is deeply saddened to share the news of the death of Ms Saoirse Corrigan, following a tragic accident yesterday.
Our prayers and thoughts are with Saoirse's family at this time. Saoirse will be greatly missed by both students and staff in St Clare's College. pic.twitter.com/ypIrLuMPRS

Castlepollard Camogie club would like to extend our deepest sympathies to the Gilchrist and Corrigan families on the passing of Senior hurler Shane and past player Saoirse.
Both stalwarts in the Castlepollard and Ringtown Hurling Clubs and extended communities.