Longford Memories - reflections in a time of pandemic 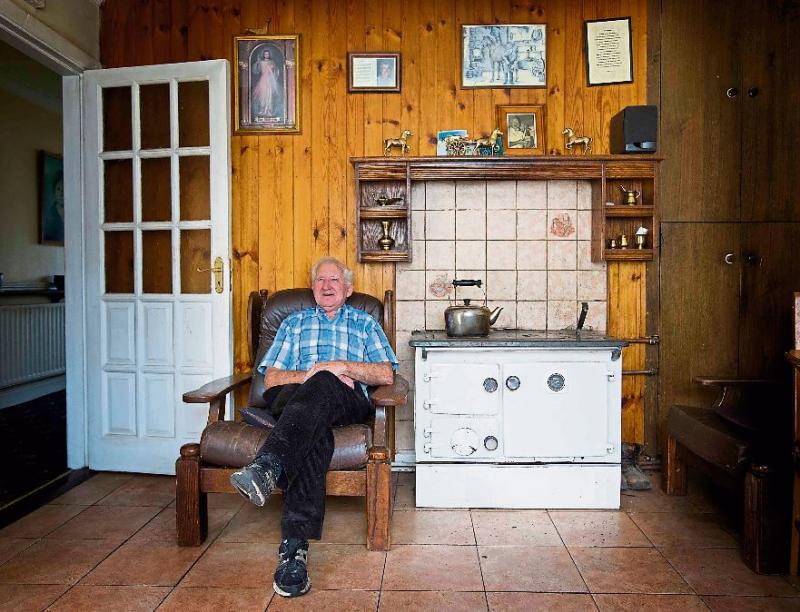 A new book, Longford Memories - reflections in a time of pandemic, by photographer and storyteller, Brian Farrell, features a variety of interesting local characters, photographed in their own settings, who provide the rich material for this valuable social history.

The book, Commissioned by Longford County Council through the Creative Ireland programme, is available from Longford library for just €5.

The project was seen as a great opportunity to reach out to the county’s older citizens, particularly those living alone, and capture their memories as they emerged from ‘cocooning.’

For a Farrell to receive an invitation to visit Longford at any time is always going to be a treat but to be invited to the ancestral home as we slowly emerged from enforced lockdown was the perfect antidote to a terrible time.

Patrick Briody remembers his grandfather’s stories of the famine from people who experienced it and he remembers the story of why his grandfather and young wife left the homeplace to strike out on their own.

Kathleen knew her father didn’t approve of the love of her life, Eugene Caherly because he was a farm labourer with no land so she left home and married Eugene in England. Kathleen found her true calling when she returned to Longford and began working with the library service.

Mai and her husband, Frank, were part of that influx of young, talented, dynamic people who came to a thriving Lanesboro in the 1960s.

A carpenter in-step with the “Beat Generation”, a chance meeting with a man who had just dug up some wood on a bog set him on a journey which would see him become one of Ireland’s most respected artists.

Wasn’t planning to be a butcher but the love of the stories his father’s customers told in the family’s Lanesboro shop stuck him to the floor. And he made good use of them too.

The former Garda Superintendent remembers his Tipperary childhood after his father who worked in the beet factory died. And he remembers his border duties before “The Troubles” when the police forces north and south of the border would travel to play football together.

If you are ever looking for Eamon Creamer he’s not hard to find. Chances are he’s with his brother, Gabriel, bringing life back into some wonderful automobile bit Eamon remembers the time before he found what he was looking for.

With a childhood which sounds like the lines of a Yeats poem, May, roamed freely in a time when you could.

A Granard man whose uncle Joe was murdered by British Auxilaries during the “Curfew Murders” in Limerick 100 years ago, his personal story is one tinged with sadness but not hopelessness.

For over 12 years Paddy Egan and his family delivered 200 bottles of fresh milk from their own dairy herd to homes every day but when we joined the EEC it put an end to that. But he gets most pleasure from his involvement in getting recognition for the Iron Age trackway at Corlea.

Held wishes to be a priest from an early age. That wish came true but it was only the beginning of a long and very varied career before the award winning author returned to Longford with his wife.

The man behind 19 issues of the annual Fireside Tales won’t stop until he completes issue 20 in 2022 and his tape record which gathers the tales from around the county has a story of its own.

Could take the beatings in school. All the children who were placed sitting at the back could. But when the master decided to humiliate him as well Mickey left school and made his way in the world despite the brute.

Has a story about £6 which paid the passage of many a family member across the Atlantic Ocean to America.

Paints and swims and remembers how his father, a Colmcille man, met his mother, a young woman from the far end of the county, Newtowncashel.

Remembers her small family farm where she was born. Their lives were guided by the seasons and the mare was an essential part of the plan.

An island woman from County Kerry came to Lanesboro at that very exciting time of change when Bord na Móna and the ESB were changing the Shannon side village forever.

A 7th generation blacksmith, PJ remembers working the forge with his father and all the great blacksmiths around Longford including the Blacksmith of Ballinalee himself.

It was Louie McEntires’ grandson, Ben, who brought him across the threshold of the now derelict school in Legga which Louie had never returned to since the day he left. The memories came flooding back.

Abbeyshrule seems to bring out the wild side of Ursula McGoey who lives in the home her grandfather built in the 19th Century.

When Kerry woman Mary married Longford footballer, Terry McGovern, she knew he wasn’t going to come live on the Dingle Peninsula. Longford and Granard would be where they set up home and the people Mary became friends with made it all possible.

Was reared beside the Shannon River. It was part of her family and she moved across it, from Connacht to Leinster and back, over the bridge at Lanesboro/Ballyleague where the Sun Dial throws its shadow on the hours.

“Good for nothings” that’s how the nuns thought of Maureen and her neighbours on the terrace in Edgeworthstown and for many years Maureen believed them. But England and night classes changed all that.

When Lucy’s father, a doctor, died she lost more than her dear dad. She lost a home, all her family belongings and her community as well.

Burundi’s civil war and genocide made it impossible to survive in the country of his birth. Hubert’s mother saw her son’s soccer skills as his passport to a new life.

Looking at St Mel’s Cathedral today it’s hard to imagine the destruction from fire in 2009 but Colm O’Reilly will never forget those hours standing, watching it come apart in front of his eyes on a Christmas Day.

The great “After Mass” speeches and debates of Sean MacEoin and Eskine Childers filled young Benny Reid with wonder and excitement and led him to a lifelong love of politics.

Always wanted to be a missionary and when she got the chance, later than she had hoped, it made her question everything she had taken for granted and changed her forever.