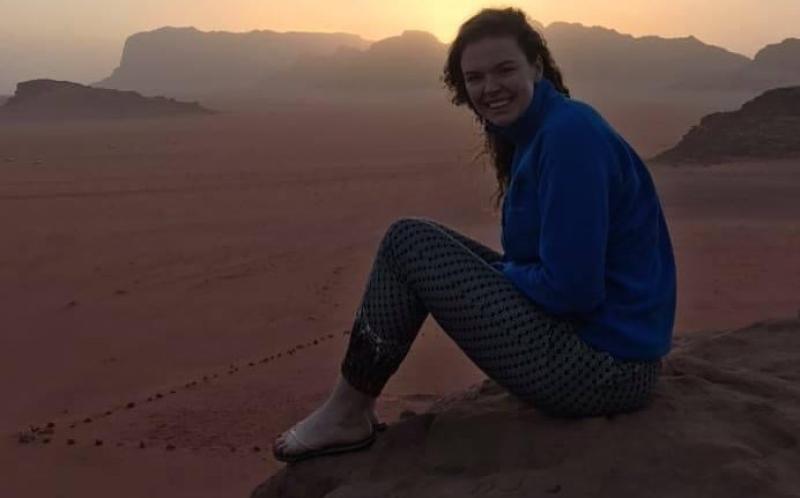 The young woman who was killed in a road tragedy in Donegal yesterday was Amanda Kinsella from Co. Carlow.

She had been home in Ireland on a summer break from the Middle East where she was working.

Tributes have been paid to her today by her many friends and colleagues.

She died following a horrific, freak accident in which she fell from a moving bus and was then struck by another vehicle.

Her death has stunned her many friends and colleagues and cast a huge shadow over all those who knew her.

She was particularly well known in GAA circles and her local club in Carlow Bennekerry/Tinryland Ladies Football Club has been among the many to express condolences and support for her family.

In a post on its facebook page, it said: “Our Bennekerry Tinryland family and community are deeply saddened and devastated to hear the news of the utterly tragic passing of club mate Amanda Kinsella. Our hearts are broken. We can’t begin to describe how beautiful, talented and truly amazing she was. We offer our deepest sympathies to her parents Mono and Patricia and siblings Aisling and David. A super star 100 times over, we will never ever forget her. Ar dheis Dé go raibh a hanam.”

Palatine GAA Club, also in Carlow, has also commented on her shock death. On its facebook page, it said: “The darkest of clouds has descended over our club and community with the immeasurable loss of Amanda Kinsella, following a tragic accident in Donegal yesterday. Amanda was a beautiful person with the most radiant personality and lit up any room she entered.

“She was an outstanding juvenile player for us, right up to under 12 level and her skill, endeavor and determination on the field of play was a joy to behold. Amanda moved on to Bennekerry/ Tinryland Ladies as we didn’t have a Ladies team at the time and she was a superstar for them too, our loss was their gain. Amanda wasn’t just a high achiever on the field of play, her ambition and drive saw her accomplish so much in her all too short life.”

GAA clubs in the Middle East have also offered their sympathies, where she had played with both Clan na hOman and the Arabian Celts.

The Arabian Celts GAA club in Bahrain, where she had been living and working, posting this on its facebook page: “Amanda was just a fantastic person - on and off the pitch. Kind, funny and full of fun and adventure. She will be sadly missed by all in Bahrain who were lucky enough to know her.”

The Clan na Oman GAA Club also expressed its sympathies to her family.

It added: “Amanda was both an inspirational figure on the field and greatly admired off it.”

Middle East GAA has also extended its sincere sympathies and condolences to the family and friends of Amanda Kinsella.

Gardaí in Donegal Town are continuing to investigate the accident that occurred at Ardnawark, Barnesmore Gap, near Donegal Town, at approximately 3.45p.m. on Friday.

Ms. Kinsella, 27, who was a passenger on a private bus, was seriously injured when she fell from the moving vehicle and was struck by a passing vehicle.

Emergency services were quickly on the scene, and she was airlifted by helicopter to Beaumont Hospital, Dublin, but passed away yesterday evening.

Gardaí are appealing to anyone who may have witnessed this collision to come forward. Any road users who were travelling in the townland of Ardnawark, Barnesmore Gap, Donegal Town on Friday afternoon and who may have camera footage (including dash cam) is asked to make it available to Gardaí.