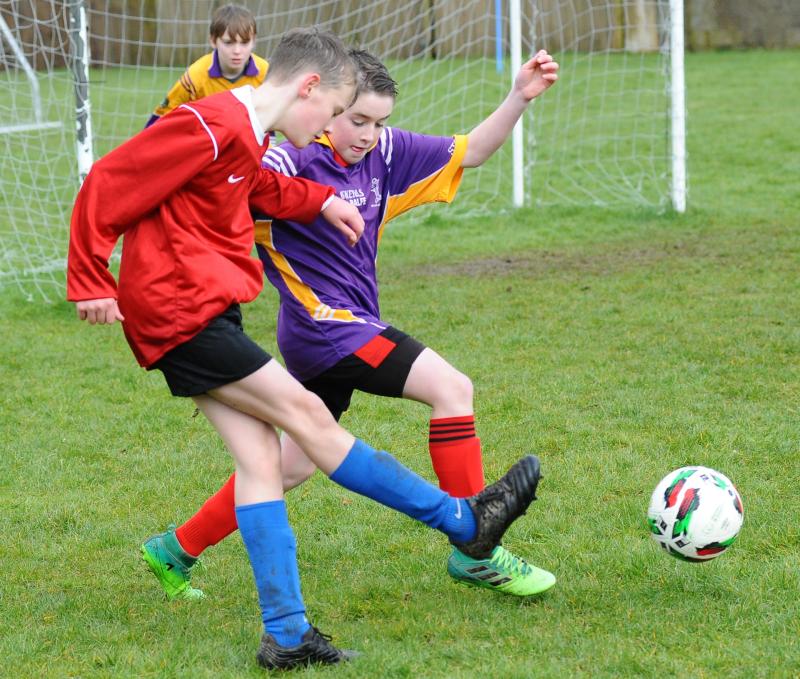 The Longford County Finals of the SPAR FAI Primary School 5s Programme were held in Abberycartron Lane on Wednesday, March 11.

38,456 students from 1,751 schools are contesting the SPAR 5s this year nationwide, 416 of which hail from Longford. Through a series of local qualification rounds just 4 schools progress from a hard-fought Longford County Final onto the North Leinster Finals.

The ‘A’ Cup, open to boys and/or mixed teams from small schools, had 13 passionate schools competing in 2 groups of 5. The various group stages were exciting and close encounters but it was Fermoyle National school that triumphed overall. The ‘B’ Cup, for medium sized schools, again proved to be a compelling division with 23 teams involved. The last school standing was Scoil Mhuire, Newtown following some competitive games.

The winners are due to progress to the North Leinster Finals on 23rd April in MDL Grounds, Navan. The rise in the number of girls playing the game has been particularly pleasing for sponsors, SPAR, as 42% of participants are now female. Participation in the girl’s division of the SPAR FAI Primary Schools 5s Programme reached an all-time high this year with 16,194 4th, 5th and 6th class girls registered making it more competitive than ever.

The Girls ‘A’, ‘B’ and ‘C’ Cup finals were also held on Wednesday where there was a fantastic atmosphere throughout the competition. In the Girls ‘A’ Cup, for small schools, Colehill National School came out on top in a in a really exciting and hard-fought tournament.

In the Girls ‘B’ Cup Final, for medium sized schools, Stonepark National School sealed qualification to the next stage after they overcame a tough challenge with the other 10 schools participating.

The SPAR FAI Primary School 5s Programme has been in existence since the mid 1990’s and has increased student participation levels by 3% since 2019 up to 38,456. The competition is run across six divisions, ensuring that schools of all sizes are catered for. Boys and girls are encouraged to play together but there is a separate competition for boys and girls dependent on school enrolment numbers.

Robert Moran, Chairman of FAI Schools stated, “SPAR have been supporting this initiative for six years now and I am delighted to see the numbers have increased substantially this season. The phenomenal participation rate just emphasises the title of the largest primary schools’ competition in the country.

"SPAR’s continued backing, both nationally and at a local level, has ensured the ongoing success of the programme and given 38,456 children an opportunity to get involved in a professionally-run, fun and inclusive programme. I would also like to extend our thanks to all schools who have participated in 2020”.

Colin Donnelly, SPAR Sales Director said, “We are very proud to support the SPAR FAI Primary School 5s Programme which has grown significantly over the past six years.  At its essence, the programme encourages children to get involved in sport and develop a love for football and physical activity which perfectly complements our SPAR Better Choices message.

"SPAR local retailers in Longford have been active in supporting the programme which has reached new heights this year and will no doubt be hoping that Longford based schools can make it all the way to the National Finals!”